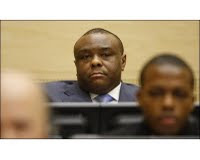 The Appeals Chamber of the International Criminal Court unanimously has reversed Pre-Trial Chamber II's grant of interim release to Jean-Pierre Bemba Gombo (left).
Bemba has been in ICC custody since July 3, 2008. On July 15, 2009, Pre-Trial Chamber II confirmed charges of crimes against humanity and war crimes against Bemba for his alleged command of Mouvement pour la Liberation du Congo forces, who purportedly murdered, raped and tortured Central African Republic civilians during attacks from October 26, 2002, to March

15, 2003. On August 14, 2009, Judge Ekaterina Trendafilova(right), in her capacity as Single Judge for Pre-Trial Chamber II, granted Bemba's 4th request for conditional release after finding that circumstances since his previous requests had changed and now warranted release. In particular, Judge Trendafilova was persuaded that the following factors made it unlikely that Bemba would abscond during interim release:
►Bemba's non-interference in the proceedings against him, including no attempts to threaten victims or witnesses;
►the unlikelihood of Bemba's resumption of criminal activity in the Central African Republic;
►Bemba's voluntary return to custody after 24-hour release to attend his father's funeral in Belgium;
►Bemba's stated intention to cooperate with the Court and to appear before it voluntarily;
►Bemba's commitment to his political career plans and desire not to be rendered a "fugitive;" and
► Bemba's strong family ties.
In a decision signed by Presiding Judge Akua Kuenyehia (below right), a 5-member panel of the Appeals Chamber reversed Judge Trendafilova's decision on three grounds:
►misapprehension and disregard for relevant facts;
►improper severance of the merits and conditions for release; and
►absence of an identified state to accept the released detainee.
With respect to the first ground, the Appeals Chamber found that Judge Trendafilova:
► failed to appreciate the increased likelihood that Bemba would abscond in light of the confirmation of charges against him as well as the potential sentence to be imposed if he is found guilty;

► overestimated the importance of Bemba's political and family ties and his reluctance to become a "fugitive," particularly when these had not in fact changed between his applications for release;
► failed to consider Bemba's financial resources;
► overestimated the weight of Bemba's offers to cooperate with the Court;
► disregarded the Registry's reports contradicting the conclusion that Bemba behaved well in detention; and
► overestimated the significance of Bemba's return to custody after his father's funeral.
On the second issue, the Chamber found that Judge Trendafilova improperly granted Bemba release with conditions while failing to specify such conditions. According to the Chamber,

Release is only possible if specific conditions are imposed.

On the third issue, the Chamber held that a specific state must be identified when granting interim release. Bemba had sought release to France, Belgium, Italy, Germany, South Africa and Portugal. Judge Trendafilova invited these states to make submissions on Bemba's release after she had granted his request. In reversing this part of her decision, the Appeals Chamber observed that granting release without simultaneously identifying a host state and establishing clear conditions for release would render such decisions "ineffective."
Bemba's trial is scheduled to commence on April 27, 2010, though -- pursuant to Article 60(3) of the Rome Statute -- his detention may be reviewed again on motion by him or the Prosecutor.
by Amy Senier at 6:16 AM