Breaking News: A Moratorium on Detention of Asylum Seekers? 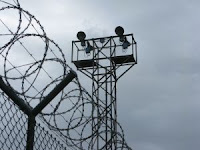 The Obama Administration announced today that it will stop detaining asylum seekers found to have a credible fear of persecution. As of January 4, all asylum seekers who can establish their identities, demonstrate that they do not pose a risk of flight or a threat to national security, and prove a credible fear of persecution or torture in their homelands will no longer be detained. I've not seen a more detailed announcement (or even the press release), but this appears to be a great step towards protecting those who have suffered persecution by enabling significantly greater access to legal representation and the support of family and friends, not to mention preventing retraumatization in detention. It's also a nice illustration of how the executive can use its discretionary powers to improve the situation of immigrants. More good immigration news to come in my Friday post!

What will this translate into in reality? These same three criteria have been in place since the mid 1990's. The policy is nothing new. Does my good friend John Morton mean that DHS will be more liberal in paroling asylum seekers? I would hope so as the only entities who currently stand to gain from the practice of detaining asylum seekers is the prison industry which gets paid by DHS to house these non-criminals.

You're absolutely right to note that the criteria aren't new, Dina, and I should add that not all asylum advocates have been as sanguine as I about the news (and to be sure, it's hard to know exactly what will happen in the absence of any clear guidance or memo). My hope is that DHS will now interpret the criteria in a manner that's much more generous to the asylum seeker. This could surely be a quixotic hope, but flip side of the executive's enormous discretion in this area of the law is that there are few legal restraints on its ability to aid asylum seekers in many ways if it so chooses.