Cophenhagen by Way of Washington

ate Change. Representatives from almost two hundred nations have gathered in Copenhagen for two weeks of intense negotiation as they seek a consensus on an international strategy for fighting global warming.
As the world focuses on Copenhagen, and amid high hopes that the world's leaders will develop a plan for confronting global warming, the United States EPA added its bit to the conversation. Today, the EPA announced that it had concluded that “greenhouse gas (GHG) emissions threaten the public health and welfare of the American people.” This critical ruling paves the way for EPA to regulate GHG emissions under the Clean Air Act—which means that, should Congress fail to pass new legislation dealing directly with climate change, the United States will still have a means (albeit less than ideal) by which to meet the GHG reduction commitments it makes in Copenhagen.
The Bush administration fought to prevent this result, stone-walling on the question until the United States Supreme Court forced the Bush EPA to confront it. Indeed, the Bush administration even went so far as to deliberately alter scientific reports in order to suggest that there was still doubt about whether the world was experiencing anthropogenically-induced climate change. Thankfully, those bad old days of the White House manipulating climate change science in order to mislead policymakers and the public about the dangers of global warming are over. As the right-wing blogosphere tries to use the recently hacked emails to try to foment doubt about the science of climate change, it is worth remembering who has really been manipulating the data to political ends ( and it is not those reporting the overwhelming global scientific consensus that it is happening.) 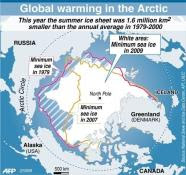 The evidence is clear and overwhelming. As a result of human activities, GHG concentrations in the atmosphere are at record high levels. The Earth has been warming over the past 100 years, with the steepest increase in warming in recent decades. Melting ice in the Arctic, the Antarctic, Greenland and disappearing glaciers around the world, bear this out. Among the more frightening consequences are increased ocean temperature and acidification, rising sea levels, changing precipitation patterns, and the dramatic effects on ecosystems and wildlife.
The United States is the second-highest emitter of greenhouse gas emissions 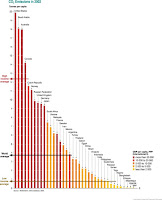 , and the largest per-capita emitter. Its absence from climate change discussion over the last eight years have been keenly felt. Although long overdue, let’s hope EPA Administrator Lisa P. Jackson is right when she described this announcement as

“cement[ing] 2009’s place in history as the year when the United States Government began addressing the challenge of greenhouse-gas pollution and seizing the opportunity of clean-energy reform.”

by Rebecca Bratspies at 3:15 PM