Drones and the Law: What We Know

(IntLawGrrls is pleased to welcome back alumna Mary Ellen O'Connell, who contributes this guest post) 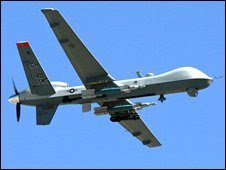 The New York Times reported last week that the U.S. would be increasing its drone strikes into Pakistan. The article attributes the following comment to Philip Alston:

it is impossible to judge whether the program violates international law without knowing whether Pakistan permits the incursions, how targets are selected and what is done to minimize civilian casualties.

Alston’s job as UN special rapporteur for extrajudicial executions is to get this information. It makes sense for him to state his concerns in a form designed to entice cooperation from the United States.
But international lawyers already have sufficient information to draw conclusions about the legality of drone use in Pakistan. We know first and foremost that the use of drones to fire missiles and drop bombs is only lawful during actual hostilities of armed conflict — drones are a war-fighting tool, not a law-enforcement tool. (photo credit) Yet, many U.S. attacks have occurred when there has been no fighting in Pakistan. During the last nine months when there has been fighting, few U.S. strikes have been of assistance to Pakistan.
Pakistani intelligence services or the military have apparently cooperated with the United States on strikes, but under international law, it should be the elected civilian officials who provide a state’s consent for foreign military operations. The New York Times article quoted the Pakistani Prime Minister as saying

the drone strikes 'do no good, because they boost anti-American resentment throughout the country.'

The United States should not be undermining civilian control in Pakistan by failing to seek the consent of civilian authorities. Nor should we settle for less than express, public consent that cannot later be denied.
We also know CIA operatives are carrying out the strikes in Pakistan, not the U.S. military. CIA operatives, however, are not part of the United States' armed forces. They do not wear uniforms, are not in the chain of command, and are not trained in the law of armed conflict. They have no right to kill in combat.
And we know that in the attempt to kill about a dozen individuals on the CIA’s "kill" list 80-some strikes have been carried out and almost 800 persons have been killed. Yet, killing suspected leaders has little long-term impact on militant organizations in a context like Pakistan. If a military objective cannot be achieved, killing violates the principle of military necessity.
A CIA spokesman quoted in the Times article says that it is "flat-out false" that hundreds of civilians have been killed by CIA strikes. But we know that the CIA has little, if any information about its victims. In such situations, the principle of humanity requires that we assume persons are civilians, not fighters. Law enforcement methods must be used against civilians, not the war-fighting mechanism of the unmanned drone. Killing many civilians in the attempt to kill a single fighter violates the principle of proportionality.
In sum, we know plenty.

(For a more detailed analysis of the law on drones, see my article entitled Unlawful Killing with Combat Drones.")