(IntLawGrrls today welcomes alumna Gay McDougall, who guest posts on her recent 2-week visit to Canada in her capacity as U.N. Independent Expert on Minorities, during which she examined compliance with instrument such as the Declaration on the Rights of Persons Belonging to National or Ethnic, Religious and Linguistic Minorities)

Canada is rightly proud of its richly diverse society, including citizens with over 200 ethnic backgrounds, numerous languages, religions and cultural practices. Many identify themselves as African and Caribbean Canadians, Arab and 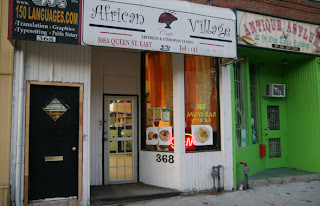 Asian Canadians; people of colour and religious minorities. These persons generally described Canada as a society open to and accepting of cultural, religious and linguistic differences, where they can express their identities, speak their languages and practice their faiths freely and without hindrance. (credit for photo of Toronto neighborhood) Canada was a leader among nations in fashioning a state policy of multiculturalism.
However, achieving a truly inclusive society requires constant vigilance. As I toured Canada members of various communities discussed with me significant and persistent problems that they face in their lives as persons belonging to ethnic, religious and linguistic minorities, as people of colour or of particular religious beliefs. Many felt that the government had failed to respond adequately to their problems or to devise meaningful solutions, leaving them and their communities feeling discriminated against, neglected or as second class citizens.
Concerns included:
► Demographics. Although Statistics Canada has done excellent work, demographics are changing so rapidly that there are new demands for deeper levels of disaggregation to keep pace with shifts in the economic and social status of specific minority communities. African Canadians in particular felt that current methods lead inevitably to neglect of their specific identities and situations. In numerous discussions with government officials I had a feeling of constant confusion about what groups were being referred to -- officials talked about “immigrants”, “visible minorities” and “cultural communities” in ways that often seemed inter-changeable and overlapping. The word “race” was almost never used; almost as if it was being deliberately avoided. Yet, I came to understand that issues of race still have salience in this society.
► Poverty. Both federal and provincial governments acknowledged to me that poverty is a problem disproportionately faced by people of colour including African Canadian and specific Asian Canadian communities. Poverty alleviation programmes in Canada must be holistic and targeted towards racialized communities.
► Education. Members of African and some Asian Canadian communities, in particular, feared that their children are having negative experiences in public schools. Drop-out rates are particularly high among boys from these communities. Parents and community leaders described approaches to education that do not take into account their different cultures of learning, curriculum and textbooks that ignore their histories and contributions to Canadian society and a gross under-representation of minorities in the teaching and school administrative staff. Clearly there are examples of good practices and projects. But, it is vital for Canada’s future that more is done.
Equally, for some minority communities, including some sectors of the Asian Canadian and immigrant community, consistently higher than average educational achievements for young people do not translate into access to professional and skilled employment and wages commensurate with their educational outcomes.
► Employment. Income levels generally are significantly lower for minorities, unemployment rates are higher and minorities are disproportionately living in the poorest neighbourhoods and in social housing with relatively poor access to services. Standards and requirements must be better enforced and penalties must be imposed to ensure that Canada’s workplaces, both public and private, truly reflect the diversity present in society and live up to the promise of equality. Government must lead by example of robust efforts and measurable achievements in recruiting, retaining and promoting minorities to senior roles in the public service, ministries and departments.
► Underemployment. There is a deep level of frustration among minority communities that highly qualified and skilled workers have been encouraged to migrate to Canada, only to find on their arrival that their qualifications are not recognized at the provincial level. They are unable to gain employment in their former professions despite critical shortages, including of doctors and nurses in some regions. The cliché of ‘doctors driving taxi cabs’ resonates as reality for many minority professionals in Canada. Effective solutions should be put in place as a matter of urgency.
► Political participation. At the federal, provincial and municipal levels minorities are extremely poorly represented in political structures and institutions in Canada. Minorities themselves must be more proactive in their own engagement and participation in political processes. However more must be done to ensure that minorities are empowered to do so.
► Policing. Every community I talked with raised serious issues of policing. The concerns included racial profiling as a systemic practice, over-policing of some communities in which minorities form a large percentage of the population and disturbing allegations of excessive use of force leading to deaths particularly of young Black males. Minorities feel that the justice system is failing them and that mechanisms of redress, including Human Rights Commissions 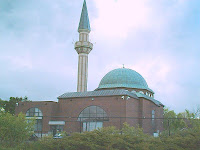 are inaccessible, underfunded and under threat. It is essential that investigations into serious allegations of police misconduct are carried out by bodies that are perceived by the communities to be independent and that mechanisms of civilian oversight are established.
► Treatment post-9/11. Members of the Muslim communities reported that they feel there is certainly freedom to practice their religion in Canada. (credit for photo of Ottawa mosque) Yet government policies post-9/11 have made them feel targeted, profiled and harassed. Muslim and Arab communities described to me deep anxiety and fear. They are concerned about racial profiling and the unsubstantiated use of Security Certificates. They perceive they have a second-class citizenship as compared to non-Muslim Canadians when they are abroad and require the support and assistance of the Canadian authorities and consular services. Steps must be taken to address these concerns.
► Human rights and federalism. Canada’s Constitution recognizes the authority of provincial governments in such fields as education, employment, the delivery of health care, social housing, and social services. The Federal government of Canada, however, has the unavoidable responsibility for ensuring that Canada meets its international obligations in all fields of human rights. The current practice has created an uneven and unclear enforcement system that varies between provinces. Officials must work towards stronger mechanisms of cooperation to guarantee consistent enforcement with respect to obligations 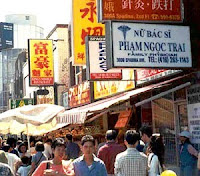 under the provisions of international treaties to which Canada is a party, particularly in the area of non-discrimination and equality and the implementation of the rights of persons belonging to minority groups. (credit for photo of Toronto neighborhood)
These are preliminary observations. My findings and recommendations will be fully developed in my report to the U.N. Human Rights Council next March.
by Gay McDougall at 6:16 AM

I was wondering about how data for this report was collected. While it is interesting to hear that some minorities feel that they are being targeted by police (to take one example among many), I am less worried with how "they" (which I am guessing means the unrepresentative sample of self-selected spokespeople that were interviewed) feel than with what the police do. I would like to see data on this, and if there are problems (and I suspect with the police, there are) then the book should be thrown at them. That said, no one should make or change policy based on anything but rigorously collected data. Is the data or at least the methodology available?