Fantasy on Island of Cuba 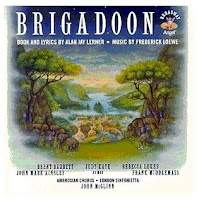 Fifty-five years ago American moviegoers escaped with matinee idol Gene Kelly across The Pond to the fantasy world of Brigadoon, a highland town that disappears for a century at a time. That exotic image does fitting service as metaphor in the newest National Institute of Military Justice account of proceedings at the "brig" across the water where the United States continues to detain hundreds of noncitizens, a small handful of whom it's charged with crimes to be adjudicated by military commission.
Telling of his adventures in an account entitled "Brig-adoon: Report from Guantanamo" is our colleague Gene Fidell, NIMJ's cofounder and president who'd served as a judge advocate in the Coast Guard from 1969-1972 and is currently Senior Research Scholar in Law and Florence Rogatz Lecturer in Law at Yale Law School. He's also the co-author, along with Dwight Sullivan and IntLawGrrl Beth Hillman, of a casebook on military justice.
Fidell repeats concerns raised in reports by prior NIMJ observers, including yours truly (all reports are available here): among others, the persistent problem that the law governing GTMO proceedings remains very much in flux. He stresses too the "sheer time, effort, and expense involved" in periodically transporting an entire trial apparatus to and from U.S. military base on the island of Cuba. He questions the "administrative complexity" of bringing in and retraining personnel, and expresses concern that some proceedings are "rehearsed at length behind closed doors," thus "shortchanging the public." A key paragraph:

Is it possible to dispense justice under these circumstances at such a distant location? Yes. The courtroom is entirely acceptable .... Proper decorum is carefully observed. But I have to say, as a taxpayer, that the arrangements are, overall, wildly inconvenient. I am not persuaded that the reasons for conducting military commission proceedings at Guantanamo, assuming they ever had any force, today come even close to justifying the expense in human resources and sheer out-of-pocket costs. If, as the Administration has decided, military commissions should continue to be employed, let it be done on the mainland. 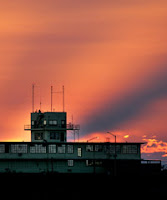 ings Stateside, Fidell notes, would both make attendance much easier for victims' families and ensure greater coverage by media, whose shrinking staffs and budgets make trips to GTMO ever less frequent.
Fidell concludes by predicting that in the next decade the commissions will be shut down and "the whole shebang will revert to Cuba" and become "a magnificent resort area, with regular direct flights from New York."
Time will tell.

(credit for AP/Mark Wilson photo of Guantánamo at sunset)
by Diane Marie Amann at 6:06 AM