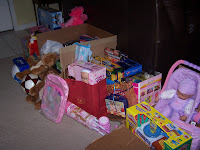 This cheery picture (right) may closely resemble your living room this Christmas morning, but in fact, it's the living room of AnaPaulina Gomez, a third-year law student at Penn State Dickinson School of Law, pictured exactly a week ago. The many toys are donations from a toy drive that Gomez organized for children detained at the Berks Family Detention Center, the last immigration detention center in the country that still holds children. These are the children of our ghost of Christmas present -- children imprisoned for violations of civil immigration, who seek refuge and find prisons.
Gomez first met these detained families as an intern at the Pennsylvania Immigration Resource Center ( 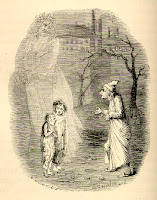 PIRC), a non-profit organization that provides immigrants with information about their legal rights. Most families are asylum seekers, and the majority come from Latin America, but there are families from all over the world, from China to Iraq, detained at Berks. During her visits to Berks, Gomez learned about the extreme hardships that the families and their children had suffered. Many of the women suffered severe physical abuse at the hands of their husbands or families in their home country and fled to the U.S. in search of a better life. Many of the children bore witness to this violence or were themselves victims of abuse. Their journeys were often terrifying, as they passed through several countries to finally arrive in the United States.
After her internship ended, Gomez often thought about the families and children at the shelter. In her words:

In early November I started thinking that the children at the shelter would be spending Christmas away from their families, in a foreign country, and without knowing what the future will bring. I thought it would be a good idea to organize a toy drive so the children would have presents to open on Christmas. My hope is to put a smile on their face and hopefully take their worries away - at least for a day.

We've blogged many times before (here, here, here, here, and here) about the situation of children in immigration detention, and we've some hope that the Obama administration may release many of these families in January. But every child in detention is one child too many, and as we celebrate this Christmas holiday with our families, let us not forget those who spend it behind bars. In Gomez's words:

I would like to thank all the people who donated toys for the children and remind everyone to have compassion for those who are less fortunate than us. In addition, I would like to encourage all not to only talk the talk but walk the walk. Advocacy entails more than voicing one's opinion, it entails action.