It's a great pleasure to welcome my colleague, Afra Afsharipour (left), as today's guest blogger.
An Acting Professor of Law here at the University of California, Davis, School of Law, Afra's scholarship and teaching focus on the areas of comparative corporate law, corporate governance, corporate social responsibility, mergers and acquisitions, and securities regulation. She posted on these issues here, during a recent guest stint at The Conglomerate Blog: Business, Law, Economics & Society. In her IntLawGrrls guest post below, Afra discusses her forthcoming article on the role of law in encouraging the expansion of Indian multinationals and their acquisition of companies in developed countries.
Before entering academia, she was an associate in the corporate department of Davis Polk & Wardwell, advising clients on domestic and cross-border mergers and acquisitions, public and private securities offerings, and corporate governance and compliance. She also served as a law clerk to Judge Rosemary Barkett, U.S. Court of Appeals for the Eleventh Circuit.
Afra earned her J.D. from Columbia Law School, where she was an articles editor of the Columbia Law Review and a submissions editor of the Columbia Journal of Gender and Law, and her her B.A. degree magna cum laude from Cornell University, where she studied government, international relations and women's studies. She was a Board Member for the Iranian Women's Studies Foundation from 2000 to 2008.
At California-Davis, Afra serves as a member of the Board of Directors of the American Society of Comparative Law, as a member of the Faculty Council of our California International Law Center at King Hall, and as advisor the March 2010 Business Law Journal symposium on "Technology Transactions in a Post-Economic Crisis Economy."
Dedicating her post to Myra Bradwell (below right), Afra writes: 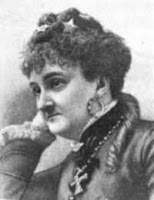 I became interested in her when I was a student at Columbia Law. The Columbia Law Women's Association held an annual dinner (which continues to this day) in honor of Myra Bradwell. There are many books and articles about Bradwell's courageous activism and fight to be admitted to the Illinois bar. Her struggle to win the right to be a lawyer, as well as her activism on behalf of women's rights generally, helped lay the foundation for 20th century women's rights activists. Personally, the Myra Bradwell dinner that I attended really inspired me during my first year of law school, so much so that I became heavily involved with both the Columbia Law Women's Association (serving as President in my second year) as well as the Columbia Journal of Gender and Law.

Bradwell joins other foremothers in IntLawGrrls' list just below our "visiting from..." map at right.

Heartfelt welcome!
by Diane Marie Amann at 7:07 AM