It's IntLawGrrls' great pleasure to welcome Dr. Nadia Bernaz (right) as today's guest blogger.
Nadia is a Lecturer in law at Middlesex University Business School in London, where she teaches Legal Method, Civil Liability, Contract Law, and the Criminal Justice System. She previously held a lectureship in human rights law at the Irish Centre for Human Rights, National University of Ireland, Galway. She holds a Ph.D. in public international law from Université Paul Cézanne, Aix-en-Provence, France.
Her publications include several articles on human rights law as well as a monograph, Le droit international et la peine de mort - International Law and the Death Penalty (2008), which was the subject of this book review in the August 2009 edition of Human Rights Quarterly.
A chapter she published recently, on the subject of the United States' role as a global actor in the debate about the death penalty, is the subject of Nadia's guest post below.
Nadia dedicates her work on the blog to Marie-Louise Giraud (1903-1943), whose Vichy-era life and death were depicted in a 1988 film, Une Affaire de femmes/Story of Women (below, with star Isabelle Huppert, as no digital photo of Giraud herself could be found online). Of Giraud, Nadia writes:

Marie-Louise Giraud was guillotined in 1943 and is one of the last women to have been executed in France. She possessed no medical skills, but 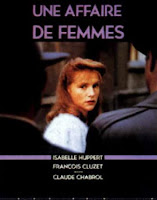 performed 26 abortions. One led to the death of the pregnant woman. She received money to perform abortions and even rented rooms to prostitutes. As such, it is hard to view her as one of the great figures of women’s rights. However, I believe that all people have their darkest sides -- even the women and men who are said to be the most exemplary -- and that the quest for a morally irreproachable foremother is probably pointless. Interestingly, Giraud's ‘immorality’ was strongly emphasized during her trial, and at least partially explains the capital verdict against her.
Marie-Louise Giraud helped many women at a time when reproductive rights were nonexistent and she died, her body literally cut in half, because of this.

Today Giraud joins other foremothers on IntLawGrrls' list just below our "visiting from..." map at right.