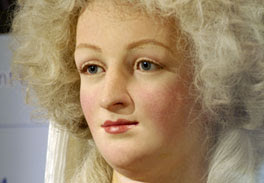 On this day in ...
... 1761, Marie Grosholtz was born in Strasbourg, France. Eventually she made her way to Versailles, where she was the art tutor of a sister of King Louis XVI. When the French Revolution broke out she was imprisoned as a royalist. But another trade she'd learned -- wax sculpture -- helped her survive:

According to her memoirs, during the Reign of Terror she had the gruesome responsibility of making death masks from head -- frequently those of her friends -- freshly severed by the guillotine.

Following an unsuccessul marriage Marie -- known thereafter as Madame Marie Tussaud -- fled to England with her children and her wax models. There she established Madame Tussauds Museum, to this day a depository of waxen images of celebrities, politicians, and scoundrels, in London and 8 other cities around the world. (credit for photo of wax statue of Tussaud)

(Prior December 1 posts are here and here.)
by Diane Marie Amann at 5:15 AM