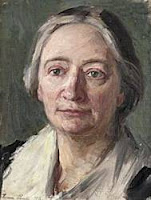 On this day in ...
... 1849 (160 years ago today), Ellen Key (right) was born in Sweden. An advocate of child-center education, women's suffrage, and feminism, she began writing in her 30s. Her "advanced ideas on sex, love and marriage, and moral conduct had wide influence." Works available in English --on the availability of which The New York Times reported as early as 1913 -- include War, Peace, and the Future: A Consideration of Nationalism and Internationalism, and of the Relation of Women to War (1916). (credit for portrait of Key by Hannah Hirsch-Pauli) Among Key's many notable quotes, here's one exemplifying her views on teaching; another, her views on war:

Everything, everything in war is barbaric.... But the worst barbarity of war is that it forces men collectively to commit acts against which individually they would revolt with their whole being.