On this day in ...
... 1818, Mary Todd was born in Lexington, Kentucky. Her mother died when she was 7, and life with her stepmother and 15 half-siblings was 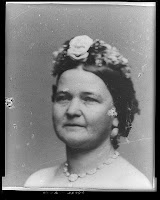 difficult, so that she went away to a boarding school, where "learned to speak French fluently, studied dance, drama, music and social graces." As a young woman she lived in Springfield, Illinois, with her sister, the daughter-in-law of a former governor. There she met and married an attorney 10 years her senior; as Mary Todd Lincoln (right) she would become the 1st Lady of the United States, during the Civil War years. Her adult life was marked by tragedy -- not only the assassination of her husband, President Abraham Lincoln, but also the early deaths of 3 of the couple's 4 sons. In 1875 Todd Lincoln's remaining son committed his mother to an asylum. That contested event is among the subjects of The Crimes of Womanhood: Defining Femininity in a Court of Law (2008). This book by Communications Professor A. Cheree Carlson is summarized in this Legal History Blog post, which also mentions an unrelated case, stating that the other woman and

Lincoln were both committed by male guardians to psychiatric hospitals against their will; juries eventually ruled that they were not insane and released them from their confinement.

Returning to the sister with whom she'd lived decades earlier, Mary Todd Lincoln died in 1882, at age 63, in the same Springfield home where she'd married. She's buried in that city as well, next to her husband.