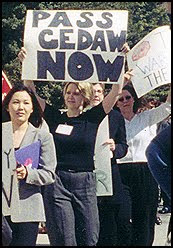 On this day in ...
... 1979 (30 years ago today), at U.N. headquarters in New York, by a vote of 130-0-10, the General Assembly of the United Nations adopted the Convention on the Elimination of All Forms of Discrimination Against Women at U.N. headquarters in New York City. The next summer, in Copenhagen, Denmark, 64 states signed and 2 ratified the Convention. On September 3, 1981, it entered into force, "faster than any previous human rights convention had done." It has 186 states parties, Qatar having joined in April "without any reservations." This, alas, has been less than common in the case of CEDAW, as this article indicates -- though Morocco withdrew its reservations last December. As for the United States, a nonparty state, a March 2009 Nation article by Betsy Reed framed the then-soon-expected debate on U.S. ratification of the Women's Convention:

Will the Obama administration, and Senate Democrats, bow to pressure from antiabortion Republicans and include ... conditions in this year's version, in a bid to ensure passage? Or will they push for a 'clean CEDAW,' as many feminists are urging? Senator Barbara Boxer, who heads the relevant Foreign Relations subcommittee, has pledged to begin hearings with a clean version of the treaty,
but pressure will quickly mount to muck it up.

(credit for Lisa Bennett photo of 2000 pro-CEDAW demonstration in Washington, D.C., sponsored by the National Organization for Women) Classes having ended for the semester, we at the California International Law Center at King Hall, University of California, Davis, School of Law, will be

marking the anniversary with a noon-hour event on Thursday, January 28: "The Women's Convention at 30." Featured will be Krishanti Dharmaraj (right) -- who successfully persuaded the Board of Supervisors to make San Francisco the 1st "city in the United States to pass legislation implementing an international human rights treaty," CEDAW -- as well as members of our CILC Faculty Council, like Afra Afsharipour, Lisa Ikemoto, IntLawGrrl guest/alumna Lisa R. Pruitt, and Madhavi Sunder.

(Prior December 18 posts are here and here.)

On the ocassion of the 30th anniversary of the CEDAW, Prof. Teresa Pizarro Beleza, Prof. Kalliope Agapiou-Josephides and myself (Carmen Marquez Carrasco) are co-editing a book that aims at examining the reception and implementation of CEDAW in EU countries. The publication will born-out of the cooperation between 41 universities in the 27 EU countries that form the network of the EMA Programme at EIUC (Venice). The provisional title is And gradually she lost her fear
30 Years of CEDAW in Europe.