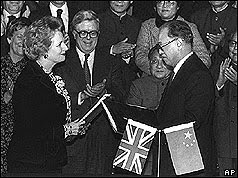 On this day in ...
... 1984 (25 years ago today), in Beijing, British Prime Minister Margaret Thatcher and Chinese Premier Zhao Ziyang signed the Joint Sino-British Declaration, which provided that Hong Kong would be returned to China in 1997, thus "end[ing] 155 years of British rule in the colony" and "launch[ing] a new era in trade and diplomacy between the two countries." The transfer did go forward as planned, although in wake of the 1989 Tiananmen massacre England "gran[ted] British passports to 50,000 Hong Kong heads of families, buil[t] a new international airport, and introduc[ed] a Bill of Rights."