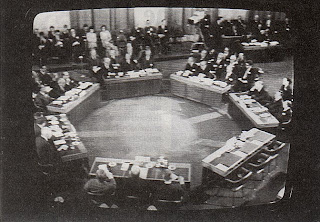 On this day in ...
... 1973, in Switzerland, diplomats from Egypt, Israel, and Jordan launched face-to-face negotiations. (A place was set for Syria, though it did not attend.) Noting that the peace talks had begun just 6 years after Arab leaders meeting in Khartoum, Sudan, had renounced all negotiation with Israel, The New York Times wrote:

Not for a quarter of a century--the entire history of modern Israel's existence--have the belligerents of the Middle East entered upon a solemn and direct encounter such as is now about to open in Geneva.

The meeting did not end in any agreement. (credit for photo of December 24, 1973, session) But it is viewed here as a forerunner to later, bilateral pacts.