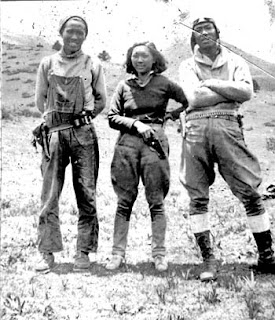 ... 1911, Adelaide Young was born in New York City. She went to college in Georgia, and then worked at a variety of jobs, among them as a server of tea on transatlantic cruise ship and as a cigarette girl in the New York nightclub that her father owned. As a newlywed Young --- whose prior outdoor experience had been limited to summer-camp counseling in New Hampshire -- in 1934 became the 1st American woman to explore the Himalayas:

Accompanied by her husband, brother-in-law, and an ever-changing cast of local porters, Young preserved botanical specimens for the American Museum of Natural History and slept with a loaded pistol under her pillow as protection against bandits.

(credit for photo of Adelaide, center, on the Young family expedition, along with her husb 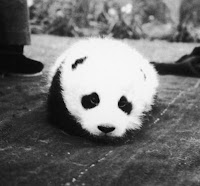 and Jack and her brother-in-law Quentin) Adelaide Young then worked as a journalist for various newspapers in China. She met Ruth Harkness, the woman who brought the 1st giant panda to the United States; on arrival in 1937 at Chicago's Brookfield Zoo, the panda (right) was given Young's nickname, "Su-Lin." (photo credit) A disc jockey in Taiwan before moving back to the United States, Young died in Hercules, California, in May 2008, at age 96.