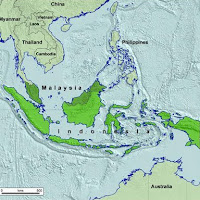 On this day in ...
... 1964 (45 years ago today), Indonesian President Sukarno, who in 1945 had led his country to independence from Dutch colonialism (prior post), declared that if Malaysia were to assume a seat on the Security Council, Indonesia would leave the United Nations, just as it had boycotted the Tokyo Olympic Games earlier in the year. According to The New York Times, The source of Sukarno's complaint was the 1963 formation of the Malaysian federation (prior post):

The Indonesian leader charged that Malaysia was formed from the former British territories of Malaya, Singapore, and the Borneo states of Sarawak and Sabah (North Borneo) against the will of the people in order to maintain British influence in Southeast Asia.

Months later Sukarno made good on the threat and withdrew his country from the United Nations; Indonesia did not rejoin until 1966.
(Prior December 31 posts are here and here.)
by Diane Marie Amann at 12:50 AM