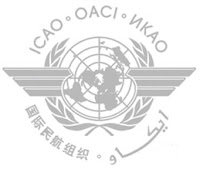 On this day in ...
... 1944 (65 years ago today), the International Air Services Agreement was signed at Chicago by 52 countries, which also established the Montreal-based International Civil Aviation Organization (logo at left). The so-called Chicago Convention established the rights of nation-states with respect to territorial airspace and civil aircraft. The treaty, which now has 129 states parties, entered into force on January 30, 1945; the United States joined on February 8th of the same year.
(Prior December 7 posts are here and here.)
by Diane Marie Amann at 5:00 AM