Read On! Black and Green Atlantic

(Read On! ... occasional posts on writing worth reading) It's my great pleasure to announce a new work hot off the presses, available just in time for holiday giving. It's The Black and Green Atlantic: Cross-Currents of the African and Irish Diasporas, published this month by Palgrave Macmillan.
Co-edited by up-and-coming scholar Peter D. O'Neill (my dearest), Ph.D. candidate in Literature at the University of Southern California, and David Lloyd, Professor of English at USC, the book collects truly interdisciplinary explorations of the transoceanic experiences of women and men who migrated from Africa and Ireland. As the publisher puts it: 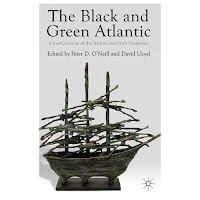 For centuries, African and Irish people have traversed the Atlantic, as slaves, servants, migrants, exiles, political organizers and cultural workers. Their experiences intersected; their cultures influenced one another. These essays explore the connections that have defined the 'Black and Green Atlantic' in culture, politics, race and labour.

Experts in this discourse will recognize that in undertaking these examinations, the collection builds upon the "extraordinarily influential" book The Black Atlantic: Modernity and Double Consciousness, published in 1992 by Paul Gilroy, since 2005 holder of a chair in social theory at the London School of Economics.
Peter and David each contributed an essay, both of much interest to anyone who studies theories of the state or issues of race and gender: Peter's is entitled "Laundering Gender: Chinese Men and Irish Women in Late Nineteenth-Century San Francisco"; David's, "Black Irish, Irish Whiteness and Atlantic State Formation."
Also of note are the many contributions by women scholars; specifically, "Fenian Fever: Circum-Atlantic Insurgency and the Modern State" by Amy E. Martin; "Green Presbyterians, Black Irish and Some Literary Consequences" by Nini Rodgers; "How Irish Maids are Made: Domestic Servants, Atlantic Culture, and Modernist Aesthetics" by Marjorie Howes; "Freeing the Colonized Tongue: Representations of Linguistic Colonization in Marlene Norbese Philip's and Eavan Boland's Poetry" by Stacy J. Lettman; "Beyond the Pale: Green and Black and Cork" by Lee Margaret Jenkins; "To redeem our colonial character: Slavery and Civilization in R. R. Madden's A Twelvemonths Residence in the West Indies" by Fionnghuala Sweeney; and "Declaring Differently: The Transatlantic Black Political Imagination and Mid-Twentieth Century Internationalisms" by Anne W. Gulick.
Rounding out the collection are: "White Skin, Green Face: House of Pain and the Modern Minstrel Show" by Mark Quigley; "Samuel Beckett and the Black Atlantic" by Jonathan Tadashi Naito; "Transatlantic Fugue: Self and Solidarity in the Black and Green Atlantics" by Michael Malouf; "Martyrs for Contending Causes: David Walker, John Mitchel and the Limits of Liberation" by Anthony R. Hale; "Embodied Perception and Utopian Movements: Connections Across the Atlantic" by Denis O'Hearn; and last but by no means least, "Ventriloquizing Blackness: Eugene ONeill and Irish-American Racial Performance" by Cedric J. Robinson.
Heartfelt congratulations!
by Diane Marie Amann at 6:30 AM