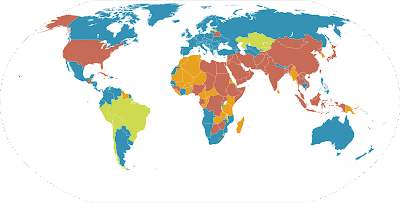 (Many thanks to IntLawGrrls for inviting me to contribute this guest post.)

Since the reintroduction of the death penalty in 1976, 1,173 people have been executed in the United States, and 3,297 currently live on death row. For more liberal Europeans (a group I pride myself on belonging to), the fact that the United States retain the death penalty is at best puzzling, if not simply outrageous. Here is a country that has made the protection of individual rights one of its core values, and yet it continues to execute people despite the countless studies proving that:
► the death penalty does not deter potential criminals more than longterm imprisonment does; and
► the death penalty is administered primarily against those, now almost regardless of their own skin color, who have killed a white person.

Such anomalies, and many others, have been studied in the framework of an American exceptionalism with regard to human rights.
I examine these issues in "L’exceptionnalisme américain et les Nations unies : le cas de la peine de mort," an essay contained in a book published last month by Dalloz, entitled Exceptionnalisme américain et droits de l’homme. The volume was co-edited by 2 scholars at the Université Libre de Bruxelles, Dr. Ludovic Hennebel, Executive & Faculty Director of the university's Institut MagnaCarta, and Arnaud Van Waeyenberge, a researcher at its Centre Perelman de Philosophie du Droit. As a whole, the collection addresses a number of these U.S. anomalies in relation to issues such as abortion, foreign policy and international criminal justice.
In my contribution to the book, I chose to show how American exceptionalism has manifested itself in relation to the death penalty at the international, as opposed to the purely domestic level. (credit for map at top, in which states that have abolished the death penalty are in blue; those that have abolished for crimes not committed in exceptional circumstances like war, green; those that abolished in practice, orange; and those that permit the penalty for some crimes, red-brown)
My article focused on the key roles played by the United States: 1st, during the process of negotiation and adoption of various U.N. instruments that mention the death penalty, such as the International Covenant on Civil and Political Rights; and 2d, more recently, with respect to the United States' position regarding numerous resolutions on capital punishment made by the U.N. Commission on Human Rights.
Three main points can be made that help sum up the rather ambiguous stance of the United States:
► The United States does not support the movement towards the abolition of the death penalty initiated by a coalition of U.N. member states (European and Latin American states); as a result, on this issue the United States stands with countries with poor human rights records (China, Iran, etc.).
► Even as it has withheld support for abolition, the United States has let other countries -- namely Egypt and Singapore -- lead a pro-death penalty group.
► The United States' position on the death penalty -- even considering that it is relatively low profile -- is in tension with its traditional approach of championing human rights at the international level.
A majority of states no longer sees the death penalty as a purely criminal legal issue, but rather as a human rights one. For this reason, the United States no longe can simply remain silent. It will find itself constantly having to justify its position.
by Nadia Bernaz at 5:15 AM