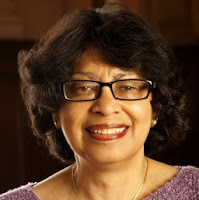 It's IntLawGrrls' great pleasure to welcome Regina Austin (left) as today's guest blogger. Below, she contributes the 2d post in a 2-part series concerning gender violence in Ciudad Juárez -- a review of films that depict that epidemic of gender violence. Yesterday, in Part 1, guest blogger Caroline Bettinger-López analyzed the recent Inter-American Court of Human Rights decision finding that Mexico's handling of the cases violated international law.
Regina is William A. Schnader Professor of Law at the University of Pennsylvania Law School, from which she also earned her J.D. A leading authority on economic discrimination and minority legal feminism, Regina has focused her scholarship on the overlapping burdens of race, gender, and class oppression. She also serves as Director of the Penn Program on Documentaries and the Law, which holds an annual Visual Legal Advocacy Roundtable for public interest lawyers, hosts screenings of law-genre documentary films throughout the year, and maintains a national repository of dozens of clemency videos as a resource for defense attorneys. In addition to using documentaries in traditional courses, Regina helps students produce their own short nonfiction videos. Among these is Shmul Kaplan, about an elderly Jewish Ukrainian asylum seeker who was forced to sue the government when his SSI benefits gave out while he was in the process of becoming a naturalized U.S. citizen.
Before entering academia, Regina was a law clerk for Judge Edmund B. Spaeth of the Superior Court of Pennsylvania, and an associate at the firm of Schnader, Harrison, Segal & Lewis. In addition to teaching Penn, she's been a Visiting Professor at the Columbia, Brooklyn, Stanford, Harvard, and Fordham law schools.
Heartfelt welcome!