January is a significant month for Guantánamo observers: January 11th marked the eighth year of its existence and January 22d was the deadline for the prison’s closure, which President Obama had called for in an Executive Order just two days after taking office in January last year. (The Executive Order is described in an earlier post). In July 2009, I posted the announcement by the Administration that it would not meet the January 2010 deadline, issuing a preliminary report instead.
The January 22d deadline passed with very little said by the Administration; indeed, it failed to even set a new date for the closure of the detention center. Asked when the Executive Order would actually be accomplished, White House press secretary Robert Gibbs said, “I don't know when the process will be done. I know they've made great progress on…establishing, first and foremost, case files and recognitions of who indeed was still there and why….There's been progress on issues of sitting a new detention facility.” Speaking of a “new detention facility,” it’s becoming clear that closing Guantánamo really means importing ‘Guantánamo’ t 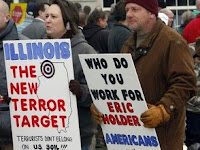 o a prison facility in Thompson, Illinois, which the Administration plans to retrofit into a supermax prison to hold ‘suspected terrorists.’
Though the Administration has not announced an official plan for what it will do with the men still at Guantánamo, anonymous government sources revealed recently that out of the 192 men, roughly 110 will be repatriated or resettled eventually, 35 will be tried in federal civilian court and military commissions, and 47 men will continue to be detained in preventive or prolonged detention without charge or trial because they are not ‘prosecutable’ but are too ‘dangerous to release.’ This begs for a detailed post exploring whether there is any legal basis in domestic and international law to support this option. (Check out a recent post by guest blogger, Laura M. Olson, where she explains the D.C. Circuit’s recent rejection of the premise that international humanitarian law constrains the government’s authority under the AUMF to detain, a position even the government has not taken).
In other brief GTMO news: (1) a panel of U.S. military judges heard the first direct appeals of detainees, Ali al-Bahlul and Salim Ahmed Hamdan, who were convicted in military commissions under the Military Commissions Act of 2006, and (2) four more detainees were sent to Europe--3 to Slovakia and 1 to Switzerland.
by Kristine A. Huskey at 6:00 AM

While closing the Guantanamo Bay prison is certainly an important issue, what about the base itself? Why exactly does the US have a base in Cuba, and when will they leave Cuban soil?