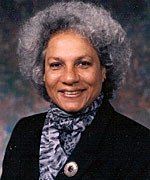 On this day in ...
... 1984, Anne Cools (left) was appointed to the Senate, making her the 1st black Canadian to serve in that upper chamber of Parliament, and the 1st black woman to serve as a Senator in North America. Born in 1943 in Barbados, Cool moved to Montreal with her family when she was a teenager. A social worker, anti-domestic violence advocate, and founder of one of the 1st women's shelters in Canada, She was a Liberal legislator for 20 years, then joined the Conservative Party in 2004 on account of her opposition to same-sex marriage. She moved from the latter caucus in 2007 over a budget dispute, and now serves as a "non-aligned" Senator.