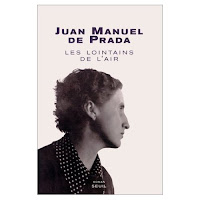 On this day in...
... 2000 (5 years ago today), Ana María Martínez Sagi died. Born in 1907 in Barcelona, Spain, she was one of the most important journalists and poets of Spain's Republican period, writing not only about politicians but also beggars and prostituted women. (credit for photo of cover of new French book about her) Martínez Sagi established a program to help Barcelona's working women learn to read and write, and she wrote frequently on the issue of women's suffrage, then controversial given that

many progressives, including some feminists, feared that women would vote according to the orders of their husbands or of the church.

She also was an athlete, accomplished in the javelin, tennis, and skiing, and was the 1st woman director of a Spanish fútbol club. Exiled during and after Spain's Civil War, she took part in the resistance while living in France, and taught university French while living in the United States. After the 1975 death of Gen. Francisco Franco, she returned home, where she lived quietly until her own passing.
(Prior January 2 posts are here and here.)
by Diane Marie Amann at 5:05 AM