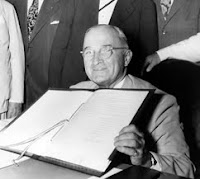 On this day in ...
... 1950 (50 years ago today), by Executive Order 10099, U.S. President Harry S. Truman declared that the mutual defense plan of the North Atlantic Treaty Organization was in effect. (credit for photo of Truman signing NATO treaty in July 1949) The move that prompted diplomats from Belgium, Britain, Denmark, France, Italy, Luxembourg, and Netherlands, and Norway to meet at the international conference room of the State Department in Washington, D.C., in order to sign bilateral agreements with the United States that enabled them to receive U.S. military matériel. The total cost of this military aid was set at $1 billion.
(Prior January 27 posts are here and here.)
by Diane Marie Amann at 5:05 AM