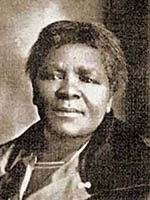 On this day in ...
... 1912, in Bloemfontein, the capital of South Africa's Free State Province, the movement that gave rise to the African National Congress was born. Initially called the the South African Native National Congress, it was founded by "in order to protest injustices against the black South African population." In 1919, its 1st Constitution limited women's membership to an auxiliary category; notwithstanding the leadership of Charlotte Maxeke (right), this status would not formally change for 3 decades. The organization became the ANC in 1923, was banned by the apartheid South African government in 1960, and has been the country's dominant political party in the post-apartheid era that began in 1994.

(Prior January 8 posts are here and here.)
by Diane Marie Amann at 5:05 AM