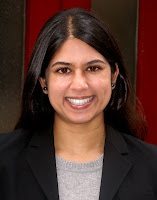 It's IntLawGrrls' great pleasure to welcome Saira Mohamed (left) as today's guest blogger.
Saira, who will join the faculty at the University of California, Berkeley, School of Law this fall. She earned her J.D. in 2005; currently, she is the James Milligan Fellow at Columbia. While a student, she was Executive Articles Editor of the Columbia Law Review, a James Kent Scholar, a Harlan Fiske Stone Scholar, and recipient of the David Berger Memorial Prize for academic excellence in international law. Saira also holds a Master of International Affairs from Columbia’s School of International and Public Affairs, and a Bachelor of Arts degree in history and international studies, cum laude and with distinction, from Yale College.
Before beginning her fellowship, Saira was Senior Advisor to the U.S. Special Envoy for Sudan and Attorney-Adviser for human rights and refugees in the Department of State. Before that, she clerked for Judge Kim McLane Wardlaw, U.S. Court of Appeals for the Ninth Circuit.
Her research and publications concentrate on public international law, international criminal law, and postconflict justice and reconstruction. In her guest post below, she discusses her analysis, in a new ASIL Insight, of the newest International Criminal Court decision respecting Darfur-related charges against Sudanese President Omar al-Bashir.
Saira dedicates her post to

lawyer, suffragist, and journalist Crystal Eastman, a founder of the modern American civil liberties movement, who recognized the connection between the domestic struggle for civil liberties and the worldwide movement for international peace.

Among other things Eastman (right), who lived from 1881 to 1928, cofounded the American Civil Liberties Union, drafted the 1st workers compensation law in the United States, helped to draft the Equal Rights Amendment, and took part in the formation of what today is known as the Women's International League of Peace and Freedom. After Eastman died in 1928 at age 47, a eulogist said of her:

'She was for thousands a symbol of what the free woman might be.'