It is IntLawGrrls' great pleasure to welcome Dr. Siobhán Mullally (pictured left) as today's guest blogger. Siobhán is a Senior Lecturer in the Faculty of Law, University College Cork, where she is director of an Irish Research Council project on Gender, Multiculturalism and Religious Diversity in Contemporary Ireland. She is currently a Fulbright Scholar and Senior Fellow at the Gender, Sexuality and Law Program at Columbia Law School. We were lucky enough to have Siobhán as a visiting scholar at Temple Law School last fall, when I was first introduced to her excellent work on gender, religion, and multiculturalism. She discusses the French Parliamentary Commission's recent report on the voile integral, which falls squarely within the themes of her scholarship, in her guest post below.
Siobhán is former Chair of the Irish Refugee Council. She has worked with NGOs and UN bodies in Afghanistan, Pakistan, Timor-Leste, Kosovo and most recently in Ethiopia. She has previously held lecturing positions at the University of Peshawar, Pakistan, and the University of Hull, UK. She has published in the field of gender, human rights and migration. Publications include: Gender, Culture and Human Rights: Reclaiming Universalism and ‘Migrant Women Destabilising Borders: Citizenship Debates in Ireland’ in Cooper D, Grabham E (eds.) Intersectionality and Beyond: Law, Power and the Politics of Location. She is Editor of the Irish Yearbook of International Law.
Siobhán dedicates her post to Hanna Sheehy Skeffington (pictured below right). Born on 24 May 1877 in Kanturk, County Cork, Johanna Sheehy married Francis Skeffington at the age of 26; henceforth they both used Sheehy Skeffington as their surname.
Five years later, they became founders of the Irish Women's Franchise League, declaring the need for ‘Home rule for Irish women as well as Irish men’ and refusing to subordinate women’s campaign for the vote to the parliamentary campaign for Irish home rule. When they failed to convince Irish Home Rule leaders to support women’s suffrage, the IWFL broke with constitutional nationalism and began militant protests. Hanna was arrested in June 1912 for breaking windows in Dublin Castle. After refusing to pay the fines she was given a two month sentence and imprisoned in Mountjoy Jail. Following her release she was dismissed from her teaching post. 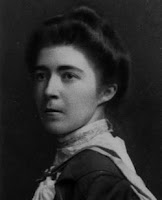 Hanna continued to combine her feminist and nationalist aspirations. She refused to join and was openly hostile to Cuman na mBan (the women’s auxillary of the Volunteer Republican movement). The British Government prevented her (and other Irish delegates) from attending the Women’s International Peace Conference at The Hague in 1915. During the 1916 Easter Rising, Francis set up a citizen’s militia to stop looting, concerned that it damaged the ideals of those leading the Rising. He was arrested by the British authorities and shot on the orders of a British Army officer.
At the end of 1916, Hanna travelled to the United States at the invitation of the Friends of Irish Freedom. Her talk ‘British Militarism as I have known it’ was later published as a pamphlet. When seeking support for the Irish cause from the British feminist movement, Hanna stressed the significance of the revolution for international feminism:

It is the only instance I know of in history where men fighting for freedom voluntarily included women.

On her return to Liverpool in 1918, Hanna was arrested and imprisoned in Holloway Jail. She went on hunger strike and was released. She joined Sinn Féin and was later appointed to the Executive, serving as its Organising Secretary in 1921-22. She served as a judge in the Republican Courts (the parallel courts operated by Sinn Fein) during the Irish War of Independence.
As she refused to take the oath of allegiance to the British Crown Hanna was barred from teaching but found work as a journalist and was later elected to Dublin City Council in 1925. She continued to oppose the Irish Free State, which she declared was anti-Republican and anti-feminist. She belatedly parted ways with Fianna Fail and De Valera, when he entered the Parliament in 1927. Her assessment was that the Free State was

rapidly becoming a catholic statelet under Rome’s grip – censorship and the like, with a very narrow provincial outlook… Result of a failure in revolution really. I have no belief in de Valera…essentially conservative and church-bound, anti-feminist, bourgeois and the rest.

Hanna combined her nationalist activities with support for the labour rights movement. In 1911, she was a founding member of the Irish Women Workers’ Union. She opposed the Conditions of Employment Bill because of the restrictions it imposed on women’s employment. She was a founder member of the Women’s Social and Progressive League which attempted to alert women to the implications of the anti-feminist provisions in the 1937 Constitution (Bunreacht na hÉireann), and in legislation being passed in the Dáil.
Hanna died on 20 April 1946. The Irish Times obituary described her as 'the ablest woman in Ireland'. Hanna’s son, Owen Sheehy-Skeffington, was a leading Labour Party activist, member of the Seanad (Senate), and a civil rights campaigner.
Heartfelt welcome!