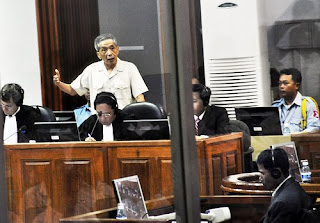 (It's IntLawGrrls' great pleasure to welcome back alumna Jenia Iontcheva Turner, who contributes this guest post)

The practice of defending persons accused of international crimes often raises complex ethical questions. This fact is well illustrated by the recent trial (left) before the Extraordinary Chambers in the Courts of Cambodia of Kaing Guek Eav, alias Duch, the former head of Tuol Sleng prison, for war crimes and crimes against humanity, about which IntLawGrrl Beth Van Schaack posted a while back. Throughout the proceedings and in his closing statement, Duch appeared to accept responsibility for the crimes with which he was charged, but he also stated that he was merely following orders and acting out of fear for his life. His Cambodian lawyer chose to mount an aggressive defense, arguing that the ECCC lacked jurisdiction over Duch and that Duch should be acquitted because he was merely following orders. Yet, in closing arguments, Duch’s French lawyer emphasized Duch’s remorse and cooperation with the court, and asked for lenience in sentencing. It is unclear to what extent Duch was truly remorseful and to what extent he wanted to mount an aggressive defense. (credit for photos) Nonetheless, the case does highlight the question of the defense attorney’s responsibility when his or her client wants to admit guilt and not contest the charges. Should the attorney acquiesce in the client’s decision not to pursue an aggressive defense? What if the attorney believes that at least some of the charges are unfounded, or indeed, that the client is innocent? The Codes of Conduct of international criminal courts do not offer clear guidance to this question.
This is one of many complex and unresolved ethical questions that international criminal defense attorneys face in their work. I discuss some of these questions in my recent article entitled "Legal Ethics in International Criminal Defense," forthcoming in the Chicago Journal of International Law. The questions addressed in the article include:
► Whether defense attorney should impeach victim-witnesses whom they know to be telling the truth;
► How defense attorneys should respond to clients who want to testify in a manner the attorney believes to be false;
► Whether an attorney should permit a client whom the lawyer believes to be innocent to plead guilty; and
► How an attorney should to respond to a client’s request to boycott or disrupt the proceedings. I argue that international criminal practice calls for a distinct approach to such ethical questions. In some cases, the special features of international criminal law call for less aggressive advocacy than might be warranted in an ordinary domestic criminal case. In others, they may demand a more independent approach to making decisions about the client’s representation.
This distinct approach to legal ethics at international criminal courts is appropriate for several reasons:
► First, international criminal courts do not follow a purely adversarial model of criminal procedure. Instead, they are a blend of the adversarial and inquisitorial approaches, and the inquisitorial approach takes a somewhat different, more reserved view of defense advocacy.
► Second, international criminal trials, to a greater degree than domestic trials, serve goals beyond that of determining guilt or innocence according to fair procedures. These goals include providing an authoritative record of the crimes for posterity, giving victims a forum in which to express their grief and outrage, spreading support for human rights, and promoting peace and reconciliation. While it is not the defense attorney’s job to promote these broader goals, they nonetheless at times suggest different approaches to the regulation of defense attorney conduct.
► Finally, some of the justifications for aggressive defense at the domestic level—such as discouraging disengaged advocacy and protesting overly harsh punishments—are less applicable internationally.
To implement the approach I set out in the article, I propose including a commentary to international courts’ Codes of Conduct (particularly the ICC Code), which would define more precisely the boundaries on aggressive practices. The commentary would not create new categories of sanctionable conduct. Instead, it would identify situations in which attorneys are not required to engage in certain aggressive tactics or follow certain client instructions. In some cases, it would also recommend a particular course of action as most consistent with the attorneys’ ethical obligations, while leaving some flexibility to attorneys in how they interpret their duties before the ICC.

by Jenia Iontcheva Turner at 6:16 AM

Jacques Vergès is counsel for Khieu Samphan in the upcoming Case 002.

Thanks, Spencer. That was the error of the editor (me), not the author. I've deleted the reference to correct it. Diane

I'm very interested in this subject and I suspect your argument has much intuitive appeal. However, I'm heartened to see Larry May's multi-volume articulation of the moral and legal principles for international criminal law and justice outlined in a broadly, and counterintuitive, "defense-oriented" approach. As May says,

I'm concerned that the approach you outline will prove corrosive to the common law's adversarial approach to zealous representation of defendants. You note that "many of the considerations that call for aggressive representation of criminal defendants at the domestic level hold true internationally as well." In fact, we might, with May, recognize the unique features of international criminal law that should prompt even greater concern with the necessity and value of "aggressive representation," given the comparative lack of (at least scholarly) attention devoted to the rights of these defendants as noted by May, as well as the nature and seriousness of the charges at the international level. Indeed our spontaneous or reflexive reaction to defendants in the dock in inernational criminal tribunals, characterized as it often is by anger, vengeance, revulsion or disgust and the like should give us pause and prompt us to bend over backwards to see that their human and legal rights are fully respected (including scrupulous observance of the principles of legality and due process) and that they have the full advantages that come with zealous adversarial representation.

That said, I look forward to a careful reading of your argument and am grateful you've addressed a topic in urgent need of discussion.