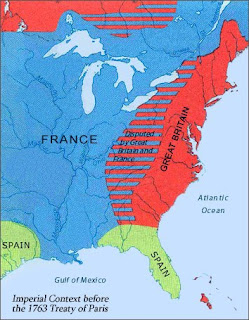 On this day in ...
... 1763, was concluded "The definitive Treaty of Peace and Friendship between his Britannick Majesty, the Most Christian King, and the King of Spain, To which the King of Portugal acceded on the same day," known as the 1763 Treaty of Paris for the city in which it was signed. In it Britain, France (his "Most Christian King" referring to France's King, Louis XV), and their allies ended the conflict known variously as the Seven Years' War or the French and Indian War by redistributing colonized territories in the Western Hemisphere. Instead of the pre-1763, distribution in the map at left (credit), Britain gained Canada and, in what is now the United States, all French-held lands east of the Mississippi, while lands to the west became Spanish. Spain further kept Cuba but handed Florida over to Britain. France further ceded to Britain Minorca and certain holdings in India and Africa, regaining islands it had held in the Caribbean as well as freedom of religion for French Catholics in Canada and fishermen off Newfoundland. As a result of diplomatic intrigues detailed in Unlikely Allies (2009), by our colleague Joel Richard Paul, the 3 countries soon would go to war again on either side of the American Revolution.