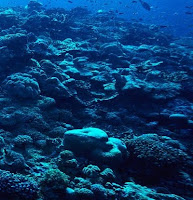 On this day in ...
... 1971, the Treaty on the Prohibition of the Emplacement of Nuclear Weapons and Other Weapons of Mass Destruction on the Sea-Bed and the Ocean Floor and in the Subsoil Thereof was opened for signature in London, Moscow, and Washington, D.C., following several years of difficulties in drafting a consensus text. The Sea-Bed Treaty, as it's known, would enter into force just over a year later, on May 18, 1972, the date on which a number of countries, including the United States, deposited instruments of ratification.