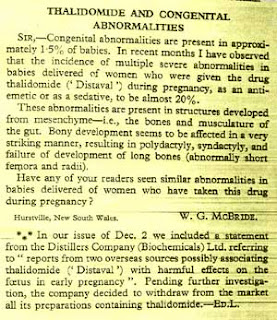 On this day in ...
... 1968, a settlement was reached in Britain's High Court, by which 62 children born with defects, after their mothers took the drug thalidomide during pregnancy, were to receive compensatory damages of between £5,000 and £45,000, for a total of £500,000 and £1.5 million, from Distillers Company (Biochemicals) Ltd. The amounts represented 40% of what each claimant had sought in the lawsuit; in exchange, all of plaintiffs' allegations of negligence were to be withdrawn. "Worldwide," according to the BBC, "some 8,000 women who took thalidomide as a sedative and to alleviate morning sickness, gave birth to babies with deformities" at midtwentieth century, before the drug was removed from the market in 1961. (credit for image of 1961 letter expressing concern about the drug, published in the British medical journal The Lancet) Just this past month, the British government extended "its 'sincere regret and deep sympathy' to survivors, and further "confirmed £20 million of Government funding for the Thalidomide Trust to help meet the needs of survivors."
(Prior February 19 posts here, here, and here.)
by Diane Marie Amann at 5:05 AM