On this day in ...
... 1980 (30 years ago today), The New York Times reported that "the White House reaffirmed today what officials termed a 'final and irrevocable' decision for the United States to boycott the Olympic Games in Moscow" (logo at right) slated for the summer 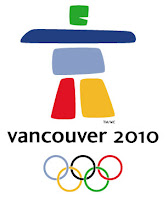 of the same year.
The move -- spurred by President Jimmy Carter's opposition to the presence of Soviet troops in Afghanistan -- is worth recalling even as, now, we watch the ongoing Winter Olympics in Vancouver, Canada (logo at left).