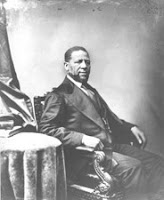 On this day in ...
... 1870 (180 years ago today), the U.S. Senate gained its 1st African American member when Hiram R. Revels (left) was sworn in nearly 5 years after the end of the Civil War. Of the inauguration of the new Mississippi Republican, a barber, minister, and Union chaplain -- who had just overcome a bitter and protracted floor challenge to his credentials -- The New York Times wrote:

The ceremony was short. Mr. Revels showed no embarrassment whatever, and his demeanor was as dignified as could be expected under the circumstances. The abuse which had been poured upon him and on his race during the last two days might well have shaken the nerves of any one.