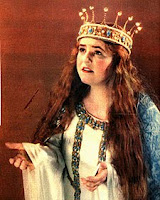 On this day in ...
... 1888, Lotte Lehmann (right) was born in Perleberg, a German city near Berlin. In her early 20s she made her opera début, as a page in a Hamburg production of Lohengrin. She would go on to perform as a soprano in many stage productions throughout Europe and in hundreds of recordings, winning renown for her work in Germany opera. (credit for photo from 1930s opera, courtesy of the Lotte Lehmann Foundation) She's credited with discovering, in 1936 in Salzburg, the Trapp Family Singers, who'd become world-famous via The Sound of Music. Two years later, just before Nazi Germany annexed Austria, Lehmann immigrated to the United States, where she continued her career, 1st as an opera singer and eventually an opera teacher. Honored here as an Immigrant of the Day, she became a naturalized U.S. citizen. In 1976 she died at age 88 in Santa Barbara, California, where a concert hall is named in her honor.