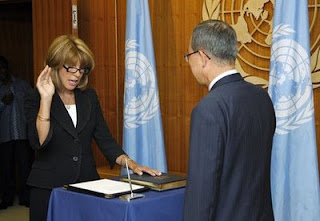 On this day in ...
... 1957, Patricia O'Brien (near right) was born. Following law studies in Ireland and Canada, she was admitted to the practice in Ireland and British Columbia, and taught at the University of British Columbia. Her career in international, human rights, and European Union law included service as Legal Adviser to the Department of Foreign Affairs of Ireland beginning in 2003. In 2008, U.N. Secretary-General Ban Ki-moon (above, far right) appointed O'Brien Under-Secretary-General for Legal Affairs and United Nations Legal Counsel. She is the 1st woman to hold the post.