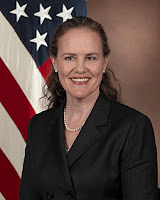 On this day in ...
... 2009, the Senate confirmed the nomination of Michèle A. Flournoy (right) as the United States' 9th Under Secretary of Defense for Policy. The daughter of a mother who was a performer at New York's Copacabana nightclub and a World War II veteran father who was a TV cinematography director for Paramount Studios, she's now "one of the highest-ranking women in the history of the Pentagon." Flournoy earned degrees at Harvard and at Balliol College, Oxford, England. From 2007 until her DoD appointment, she served as founding President of the Center for a New American Security, a Washington, D.C.-based thinktank.

(Prior February 9 posts are here and here.)
by Diane Marie Amann at 5:05 AM