Today's Valentine's Day.* 'Round the world thoughts turn to celebration of love and friendship. No doubt some will feature "a bottle of the Widow," as the British used to call the bubbly treat to the right. No better time, then, to post on the recent

biography of the woman behind the bottle. The title says it all: The Widow Clicquot: The Story of a Champagne Empire and the Woman Who Ruled It (2009).
In a scant 200 pages, the book illuminates a central fact: the signature on each bottle's egg-yolk-orange label, "V Clicquot Ponsardin," is not the autograph of a fictitious woman conjured, like Betty Crocker, by an office-full of admen. Rather, the signature belongs to a real woman who lived a full and real life, Barbe-Nicole Clicquot Ponsardin (below left).
Born in 1777 in Reims, a city in France's Champagne region, Barbe-Nicole lived in a period marked by the political tumult of Revolution, Empire, Restoration, Republic. Marriage arranged at 21 ended when Barbe-Nicole was widowed at age 27, her husband rumored a suicide. Single mother of a young daughter, she eschewed remarriage for a path far less tread by women 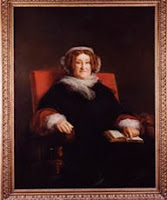 of the day: she made champagne, 1st for elite imperial palates, and eventually, through her manufacturing and marketing innovations, for a vast and thirsty middle class. In painstaking research of records maddeningly devoid of personal details, author Tilar J. Mazzeo (below right), Assistant Professor of English at Colby College in Waterville, Maine, could find no evidence that Barbe-Nicole ever left France. Yet energy and hard work -- plus a keen competitive edge that finds her running contraband wine through wartime blockades -- made Barbe-Nicole, by age 40,

one of the wealthiest and most celebrated entrepreneurs in all of Europe and one of the first businesswomen in history to lead an international commercial empire.

(p. xvii) It was a role unique for the time (approached perhaps only by Louise Pommery, a somewhat younger Frenchwoman who invented the brut style of champagne). Curiously, it's a role away from which Barbe-Nicole steered her own surviving heirs, a daughter and granddaughter. Thus it would take generations before women of business looked to la Veuve for inspiration. Yet before her death at age 89 she urged her granddaughter to excel in other pursuits, as is evident from this letter (p. 181):

'The world is in perpetual motion, and we must invent the things of tomorrow. One must go before others, be determined and exacting, and let your intelligence. Act with audacity. Perhaps you too will be famous...!!'

To those words and the woman who wrote them, a Valentine's Day toast.

* It's also the 1st day of the Lunar New Year of the Tiger (prior post), but that's another story.