Pre-Trial Chamber II of the ICC has authorized the first investigation by the Prosecution proprio motu (on his own motion) into the post-election violence of 2007-2008 in Kenya portrayed in this video. The decision, made pursuant to article 15(4) of the Rome Statute, responds to the Prosecutor’s "Request for Authorisation of an Investigation Pursuant to Article 15" submitted on November 26, 2009.

Followers of the Court do not need to be reminded that Article 15 was one of the most controversial provisions of the ICC, with some states fearing that the Prosecutor would abuse his proprio motu powers by initiating politically motivated or frivolous investigations. To respond to these concerns, the drafters of the ICC Statute added a procedural hurdle relevant to Article 15 investigations only—the Prosecutor must with supporting material and victims’ representations convince a Pre-Trial Chamber that there is “a reasonable basis to proceed” at a very early stage in the investigation. This is the lowest evidentiary standard provided for in the Statute given the preliminary nature of the proceedings. Para. 27. In exercising this supervisory function, the PTC concluded that it should also consider the admissibility of the case as set forth in Article 53(1)(b) of the Statute.

With respect to the first requirement—that there is a reasonable justification for a belief that a crime falling within the subject matter, temporal, personal, and territorial jurisdiction of the Court has been or is being committed—the PTC found that there was a reasonable basis to 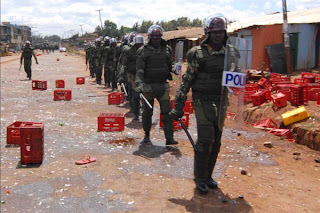 believe that crimes against humanity were committed in Kenya. Most interesting in this regard is the PTC’s discussion of the requirement that the attack against a civilian population be pursuant to a State or organizational policy. The PTC noted that the attacks in questions tended to be ethnically-based and politically-motivated. Many attacks were between the key political parties in Kenya, such as the Orange Democratic Movement (which supported Raila Odinga in the 2007 presidential elections) and the Party of National Unity (which supported Mwai Kibaki), or were initiated by the police (left). The PTC noted that while some of the post-election violence was spontaneous or opportunistic,

a number of the attacks were planned, directed or organized by various groups including local leaders, businessmen and politicians associated with the two leading political parties, as well as by members of the police force. Para. 117.

The PTC determined that the crimes against humanity in question constituted murder, rape and other sexual violence, deportation or forcible transfer of the population, and other inhumane acts. In particular, the PTC noted that

With respect to the second requirement—Articles 17/18 admissibility, which invokes both complementarity and gravity—the PTC concluded that it would focus on potential cases that could be brought against potential defendants implicated in particular crimes within the Court’s jurisdiction and whether the relevant state is conducting national proceedings in relation to those crimes. Paras. 51-52. In finding the situation to be admissible, the PTC considered the following:

Throughout this assessment, the PTC cited from the representations of the victims to gauge the gravity of the crimes alleged. Para. 196. The PTC noted the particular brutality of many of the attacks alleged. Paras. 193, 199. In addition, many rape victims contracted HIV and were abandoned by their families and many people lost their homes and possessions. Para. 195. The PTC concluded that the crimes alleged satisfy the elements of scale and noted with approval that the Prosecutor intended to focus on those in high-ranking positions who planned, incited, financed, or otherwise contributed to the organization of violence.

Although the Prosecutor’s request had focused on the immediate post-election period, the decision authorized him to investigate events since June 1, 2005 to the extent they relate to the crimes against humanity committed. Para. 205.

Judge Hans-Peter Kaul (Germany, at right)) dissented from the authorization to commence an 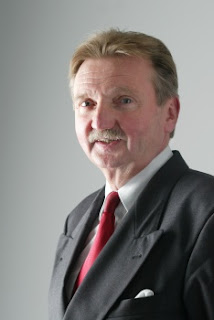 investigation on the ground that the acts alleged did not constitute crimes against humanity in that they were not committed as part of an “attack against any civilian population” “pursuant to or in furtherance of a State or organizational policy to commit such attack.” Para. 4. He emphasized that in his estimation the ICC is not the right forum to investigate the crimes alleged and expressed concern that the majority opinion blurred the demarcation line between domestic crimes, prosecutable in domestic courts, and international crimes, of concern to the entire international community. Paras. 6, 9. Broadening the Court’s jurisdiction in this regard infringes upon state sovereignty, will generate perceptions of arbitrariness when the Court does not tackle all such situations, and risks turning the Court into

a hopelessly overstretched, inefficient international court, with related risks for its standing and credibility. Para. 10. 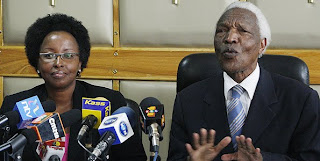 of the Truth Justice & Reconciliation Commission (she did not relinquish her spot on the Commission), about which we’ve blogged before. Murungi’s protest comes after she and our friend and colleague Ron Slye (the only non-African on the Commission) publicly asked the Chair of the Commission, Bethuel Kiplagat (also right), to step down from the Commission, because he has been named as a potential witness to the murder of former Foreign Affairs Minister Robert Ouko during the Moi regime and because certain questionable property transactions involving him fall within the Commission’s mandate. The ICC did not mention the current stalemate with the TJRC as a ground for its admissibility ruling, but the unwillingness of Kiplagat to step aside so that the Commission can continue its work is consistent with the impression that there are elements within Kenya who would rather see impunity than accountability.

The International Center for Transtional Justice (ICTJ) has a detailed analysis of transitional justice in Kenya here.