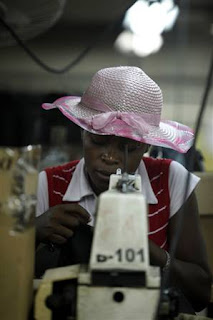 You might think this a rhetorical question--surely the answer is obvious? Alas, it is not so obvious to the architects of the rebuilding plan for Haiti. Central to the Haitian recovery effort is a plan to revitalize the textiles and apparel sector, which has existed in Haiti since the time of the Duvaliers in the 1950s. UN Secretary General Ki-moon, President Clinton, President Obama and the U.S. Congress have all touted the plan, as has Haitian officials. In principle, it is not a bad idea: Factory owners in South Korea and elsewhere would relocate to Haiti to produce garments; their incentive would be cheap and abundant Haitian labor (unemployment even before the quake was somewhere around 80%), and duty free access to the U.S. market guaranteed through programs like HOPE II. The problem? At $3.09 a day, wages for garment workers are at 1984 levels and are not enough to sustain the worker, let alone her family.

All seem to agree that wages are simply too low. Indeed, the $3.09 was a significant increase brought about when lawmakers raised the minimum wage up from just $1.72 to $5 a day last year in response to protests. But factory owners complained, and President Rene Preval worked out a compromise allowing garment workers to be paid less. "It's not enough to make a decent living, but it's the first step," says the President of Haiti's Association of Industries. It is a refrain Haitian workers have heard for decades.

Relying on jobs that pay so low they cannot meet the basic needs of the worker is not a sustainable recovery plan for Haiti. It is a recipe for disaster.

photo credit
by Marjorie Florestal at 11:53 AM