Comparative colloquy at the Court 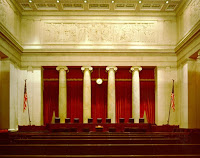 Law beyond borders unexpectedly emerged as a topic for discussion at the Supreme Court a few days ago.
That foreign context would be discussed in Samantar v. Yousuf, the Alien Tort Statute case argued Wednesday (prior posts here and here), was a given. But who thought that practices abroad might inform discussion a day earlier of whether the 2d Amendment limits local gun control laws? Yet they did, and more than once.
The official transcript shows that early in oral argument, the attorney for petitioners in McDonald v. City of Chicago, Alan Gura, contended that owning a gun not only is guaranteed by the 2d Amendment, but also is among the unenumerated "privileges and immunities" guaranteed by the 1st section of the 14th Amendment. His likening of gun ownership to other privileges and immunities he said are enjoyed by U.S. citizens prompted this exchange with Justice Ruth Bader Ginsburg (below right), who concurs with the Court's occasional efforts at comparative constitutionalism but who dissented in last Term's gun-rights case, District of Columbia v. Heller:

JUSTICE GINSBURG: Does it work just one way? I mean, if the notion is that these are principles that any free society would adopt, well, a lot of free societies have rejected the right to keep and bear arms.
MR. GURA: ... American history and tradition are important to consider what rights are protected in this country. It's true that our friends overseas who have more or less civilized, free societies don't respect rights to the same level that we do. For example, England, which is a free society, has a monarchy. They have hereditary lords in parliament. They don't have First Amendment protection.
JUSTICE GINSBURG: But then it's not one expression of this unenumerated rights, natural rights, or the rights that any free society -- basic to a free society. So you -- you have to trim your definition. It's not basic to any free society. (pp. 9-10)

Analogous inquiry arose later. Chicago's attorney, James A. Feldman, asserted that no right could be held to constrain states and local governments unless it was "implicit in the concept of ordered liberty"; that is, unless it satisfied a time-honored substantive due process test, one that the Court at times has applied after consulting foreign context (a methodology about which I've written here and here). Justice Antonin Scalia (below left), author of the majority opinion in Heller, countered. He referred to the United States' jury-trial right, one that the Court, reversing precedent, held to be fundamental in Duncan v. Louisiana (1968):

JUSTICE SCALIA: Is the right to trial by jury implicit in the concept of ordered liberty? ... My goodness ... there are a lot of countries that don't give the right to trial by jury, even England does not give it in all criminal cases.
MR. FELDMAN: I think it is in the following sense, when you are talking about a procedural right that is embedded in a particular procedural system, you have to look at how that system operates and how the -- the right works within that particular system. (p. 30)

Agreement came from Chief Justice John G. Roberts, Jr. (below right), who joined the majority in Heller and who'd spoken against consulting foreign law during his confirmation hearings:

CHIEF JUSTICE ROBERTS: I think that's exactly -- that's exactly right. And that is what the Court elaborated on in Duncan. I do think the focus is our system of ordered liberty, not any abstract system of ordered liberty. You can say Japan is a free country, but it doesn't have the right to trial by -- by jury.
The -- the -- the concept only makes sense, I think, if you limit it to our system.
Under our system, as you said, the -- the right to a jury is essential.
MR. FELDMAN: I -- I agree -- I -- I -- I think that's right. ...

At this rather hesitant concession, the Chief Justice jumped in:

CHIEF JUSTICE ROBERTS: Well, if you think that's right, why wouldn't you think, for all the reasons given in Heller, that the Second Amendment right is essential to our system, whatever it may be with respect to France or England or anywhere else? (p. 31)

Roberts' rejoinder well may have left Feldman regretting this half-step into comparative constitutionalism on the matter of individual gun ownership and state regulations intended to protect public safety.
by Diane Marie Amann at 6:16 AM