There is a demographic crisis in China that arguably rises to the level of "gendercide."
Women in China are bought and sold, murdered and made to disappear, in order to comply with a governmental policy that coincides with the cultural phenomenon of male-child preference. Demographers estimate that there are between 50 and 100 million missing women in China. In answer to the resulting scarcity of women, gangs, "specialist households," and "specialist villages" have been working in an organized chain to kidnap and sell women in China.
Several factors work interdependently to cause a serious shortage of women in China. Women are disappearing because of:
► social pressures of male-child preference;
► zealous enforcement of China’s "One-Child Policy" by local government authorities; and
► murderous responses to this policy undertaken by millions of ordinary people in China, who are desperate to have a son.
(credit for Reuters photo of above-right mural extolling One-Child Policy)
The 2000 Chinese census reported that 117 boys were born for every 100 girls, compared to the global average of 105 or 106 boys to every 100 girls. This disparity may be linked to the practice of aborting female fetuses and killing female babies.
This gender imbalance has caused an increase in prostitution and human trafficking in China.
Sex trafficking in China takes many forms:
► purchase of women for brides;
► purchase of a male son; or
► sale of unwanted female children.
Many men, primarily in rural China, desperately seek brides in a country where women are in short supply. These men will resort to purchasing a trafficked woman for marriage. Couples seeking a male child will sell or even murder their girl child in order to make room for the purchase of a trafficked baby boy. Young women and infants are bought and sold like cargo.
Human trafficking in China is a lucrative international business that is expanding due to several factors:
► the aggressive implementation of the One-Child Policy;
► a faulty legal system, and
► the blind adherence to longstanding cultural traditions that devalue women.
In China, Communist Party directives overshadow the legislative and judicial process. The primacy of government policy results in the ineffectiveness of laws that theoretically protect women and female children in China.
In order to reverse the deleterious effects of the One-Child Policy and its commodification of women, the Chinese government must make a commitment to implement laws and policies that can reverse longstanding cultural trends and combat discriminatory traditions against women. 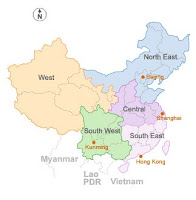 (credit for China map, courtesy of International Labour Organization Mekong Sub-regional Project to Combat Trafficking in Children and Women)
Since 1979, China has instituted economic reform policies that miraculously work in harmony with a Communist political system. Now China needs to perform another miracle: the adoption of cultural reforms that produce gender parity and that stop the marginalization of women in Chinese society. Only then will the lucrative business of trafficking in women be reduced, if not eliminated entirely.
by Christie Edwards + Susan Tiefenbrun at 5:05 AM