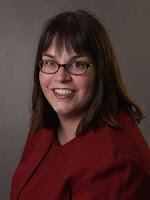 It's IntLawGrrls' great pleasure to welcome Jennifer Kreder (right) as today's guest blogger.
Associate Dean for Faculty Development and Associate Professor of Law at Northern Kentucky University's Salmon P. Chase College of Law, Jennifer's an expert on laws respecting art and cultural property. She's the author of a chapter in the 2009 Yearbook of Cultural Property Law, and has presented both in the United States and abroad. In her guest post below, Jennifer discusses a few of her recent publications on Nazi-confiscated art, and further discusses the American Society of International Law Interest Group on Cultural Heritage & the Arts that she's just cofounded. As she described, the group has organized a panel Friday at the annual meeting of ASIL. (Prior IntLawGrrls posts on this week's meeting are here and here.)
Before entering academia, Jennifer was a Litigation Associate with Milbank, Tweed, Hadley & McCloy LLP in New York, concentrating on Holocaust era intergovernmental negotiation and litigation issues, art disputes, and class actions. In 2009 she took part in a State Department meeting to prepare for the Diplomatic Conference on Holocaust Era Assets held later that year in Prague, and also coauthored motion and amicus brief concerning conflicts law and Holocaust history in a critical Nazi-looted art appeal. She previously served as Co-Chair of the Art & Cultural Heritage Committee of the American Bar Association Section of International Law, and is active in the Lawyers Committee for Cultural Heritage Protection.
Jennifer earned her J.D. from Georgetown University Law Center, and her B.A. in political science, with high honors, from the University of Florida, and studied at Karl Marx University of Leipzig, Germany, as well as in Austria, Costa Rica and Mexico. She clerked for U.S. District Judge Barefoot Sanders, Northern District of Texas, and has taught at Stetson University College of Law, including in its study abroad program in Estonia, and in the Gonzaga University School of Law Florence, Italy program.
Heartfelt welcome!
by Diane Marie Amann at 6:16 AM