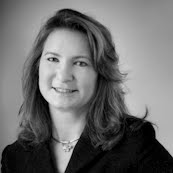 It's IntLawGrrls' great pleasure to welcome M.C. Sungaila (right) as today's guest blogger.
M.C. joined the firm of Horvitz & Levy, Encino, California, in 1997, and became a partner in 2003. She earned her B.A. with multiple honors from Stanford University and her J.D. from the University of California, Los Angeles, then clerked for Judge Alicemarie H. Stotler of the U.S. District Court for the Central District of California and Judge Ferdinand F. Fernandez of the U.S. Court of Appeals for the Ninth Circuit.
An appellate specialist, M.C. has consistently helped secure important rights for women and girls internationally, nationally, and throughout California. She's served as pro bono counsel of record for amici in, or consulted on, more than 17 women’s and civil rights cases before the U.S. Supreme Court, the Inter-American Commission on Human Rights, the Inter-American Court on Human Rights, and the California Supreme Court and Courts of Appeal. Recognitions of M.C.'s work include listings in the Best Lawyers of America (2010) and the Top 50 Southern California Female Super Lawyers (2008-2010), as well as profiles in the Los Angeles Times and National Law Journal.
Along with David S. Ettinger, a colleague at Horvitz & Levy, M.C. filed a brief in the Inter-American Court of Human Rights on behalf of Amnesty International and more than 50 other groups and legal experts in Campo Algodonero, involving violence against women in Ciudad Juárez. She analyzes the Inter-American Court's decision in her guest post below.
M.C. dedicates her IntLawGrrls contribution to the women of Ciudad Juárez who 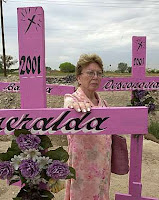 fought for dignity, respect, and justice for decades and at great personal cost. She calls special attention to 2008 Mexican National Human Rights Award winner Esther Chávez (left), who was one of the first to discover the widespread murder of young female factory workers, advocate for their murders and disappearances to be investigated, and founded Casa Amiga (the region’s first rape crisis and domestic violence center). (photo credit) Born in Chihuahua, Mexico, in 1933, Chávez died in Ciudad Juárez on Christmas Day 2009, weeks after the Campo Algodonero decision became public.
by Diane Marie Amann at 6:16 AM