(My thanks to the IntLawGrrls for allowing me to contribute this guest post about my most recent article, Judging from a Guilty Conscience: The Chilean Judiciary's Human Rights Turn (Law and Social Inquiry, 2010), with your audience).

I worked as a journalist in Chile from 1991-1994, the first years of the new democracy. At that time, it was considered inconvenient and something of a faux pas to make mention of the human rights legacy of the Pinochet regime (1973-1990), and most Pinochet-era human rights cases were suspended or closed.
Thus, when I returned in 1999 to conduct legal research for The Center for Justice and Accountability, I was amazed to find that news of prosecution of Pinochet-era crimes filled the front pages of all the 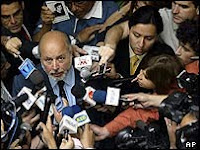 kiosk papers. Suddenly, and for the first time, judges (such as Judge Guzman, at left, and Judge Valdovinos, at right below) were actively involved in investigating decades-old crimes they had for years ignored. These were the same judges who had denied over 90% of habeas corpus petitions filed during the height of the Pinochet regime’s violence, and who had been instrumental to legitimating the military regime. Since 1999, these very judges have sentenced more former officials of the military regime for human rights violations than judges of any other country in Latin America.
In this article, I seek to explain this dramatic turn. Extensive interviews with the judges revealed that the prosecutorial turn reflects the judiciary’s attempt to atone for its complicity with the dictatorship. The 1998 arrest of General Pinochet in London created

pressure for prosecution of Pinochet-era human rights violations; but it is the contest over the judiciary’s legacy, as an important piece of post-authoritarian memory struggles, that explains why Chile’s notoriously illiberal judiciary ceded to that pressure. Understanding this redemptive dynamic is important, for judiciaries often emerge from a repressive regime with no sense of wrongdoing, quick to blame injustices on the executive, the legislature, or circumstances outside their control.

Virtually no professional group emerged from the Nazi era with so good a conscience as that of the jurists,

Ingo Müller writes (1991, 219). My article explains how this judicial consciousness came to change in Chile, with clear implications for the study of transitional justice, the spread of human rights norms, and the study of judicial politics.
In emphasizing the redemptive impetus, I do not deny that civil society, executive leadership and transnational networks of activists played key roles in the judicial turn. Nor do I mean to depict as heroic a judiciary that has been characterized by reticence and conservatism on rights issues. However, by focusing on the perspective of the judges themselves, the article opens a window on a transformation that has been little explored, and which led to important moments of justice.
One judge, for example, described his search for two men who had disappeared in 1973. The men had fled toward Argentina through the Andes. Thirty years later, a team led by the investigating judge retraced their steps, traveling 360 kilometers (224 miles) into the Andes by horseback:

We rode for ten days. . . . Perhaps an older judge would not have been able to do it. I was camping in the mountains, on the border with Argentina in a tent. . . . We worked with the Police. We worked with investigations. Digging everywhere . . . we found nothing. I took along the brother of one of the disappeared men. And that brother, on the last day, when we found nothing, said to me: “Your honor, do not feel badly. I am satisfied . . . after seeing you in front of all these people, working. After seeing you crawling and digging in the weeds, side by side with your assistants, and you were always the first. Now I am at peace with the justice system. If we cannot [find him] it is because it was impossible, not because the effort wasn’t made. And I think that my mother will be at peace now. She may even die on me now.” The mother passed away the following week. (Interviewee 22, March 11, 2004)

It is not normal practice for the judge to join this part of an investigation, to invite along plaintiffs, or to put so many resources into an expedition likely to fail. By doing so, however, the judge seeks to compensate for the judiciary’s past omissions and for its callousness to the victims of the Pinochet-era crimes. The underlying crime could not be solved, but, by the judge’s telling, the injustice that had been committed by the judiciary of not investigating was now undone. The image of the saddle-sore judge on his knees, with a victim as witness, conveys at once an act of penitence and an act of justice.
by Alexandra Huneeus at 5:05 AM