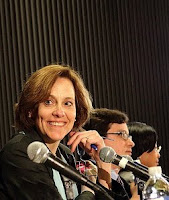 'Grrls. . . It is a great pleasure and honor to announce that our very own, Diane Marie Amann (right), founder of IntLawGrrls blog (which just celebrated its 3d birthday on March 3!), is being awarded the "Mayre Rasmussen Award for the Advancement of Women in International Law."
The award is presented by the American Bar Association Section of International Law to individuals who have achieved professional excellence in international law, encouraged women to engage in international law careers, enabled women lawyers to attain international law job positions from which they were excluded historically, or advanced opportunities for women in international law. Past recipients include Marsha Echols, Rona R. Mears, Dianna Kempe, Lucinda Low, and, posthumously, Mayre Rasmussen.
Rasmussen was a pioneer in the field of international business law. She was one of the first women to break into the international business law practice at a major international law firm, and was also one of the first women to achieve a major leadership position in the Section of International Law and Practice. She was a founder of the Women's Interest Network (WIN), the successful ABA International Law Section program that focuses on women in international law; she was also well-known for mentoring women.
Diane follows easily in those great footsteps.
You can read the details of Diane's extensive and impressive bio here. But, in a nutshell, Diane has more degrees than she knows what to do with, was a Supreme Court law clerk, has practiced law in both the private and public spheres, taught law all over the world, directed institutions, received numerous awards, and mentored students and colleagues. IntLawGrrl Beth Van Schaack sums it up:

Not only is Diane an intellectual powerhouse and inspired and inspiring teacher in the field of international law, she is also an incredibly generous mentor.

And, as you know, Diane is the also the founder of IntLawGrrls blog, which has had more than 3,000 posts since inception with almost 3 dozen permanent IntLawGrrl voices and more than 100 women who've joined the blog as guests. As another IntLawGrrl, Jaya Ramji-Nogales, eloquently describes it:

Through IntLawGrrls, Diane has created a vital and vibrant space for female academics to voice concerns specific to our experience and to express our opinions on the pressing issues of the day.

Indeed, it was the chorus of IntLawGrrls singing Diane's praises to the ABA that nominated her for the Rasmussen Award. A clear reminder that we must continue to actively support and promote one another.
CONGRATULATIONS Diane! You are a true inspiration to us all with your tireless efforts to advance women in international law.
Diane will receive the award at either the ABA International Section's Women's Interest Network (WIN) in April at the 2010 Section Spring Meeting in New York City, or in in August during the ABA Annual Meeting in San Francisco. We'll keep you posted!

My thanks to all 'Grrls for support and inspiration!
Special thanks to IntLawGrrls Kristine A. Huskey and Naomi Roht-Arriaza who, I'm told by the ABA, each sent a nomination on my behalf. And a further shout-out to Kristine for encouraging many other 'Grrls to add their voices.
The award truly belongs to all of you.
Diane

Yes, hearty congratulations to Diane and all the IntLawGrrls at this wonderful blog.

Congratulations to you Diane. A well deserved honor. Keep up the good work, and the good bloggin!