Ciudad Juárez, Mexico, has been named one of the most dangerous cities in the world. More than 4,000 people have been killed in the city since January 2008, following a declaration of war between two drug cartels. Three persons with ties to the U.S. consulate were killed on the same day just last week. Federal troops have been called in to attempt to quell the latest round of violence. 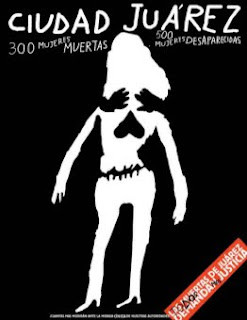 But before the official drug war, there was a war on women, which Mexican authorities all but ignored.
According to the Rapporteurship on the Rights of Women of the Inter-American Commission, from 1993 to 2003 an estimated 268 women and girls were murdered, with only 20 percent of these crimes ending in trials and convictions, while the disappearances of an additional 250 women and girls also remained unsolved. (image credit) The number of women killed in Ciudad Juárez throughout the 1990s increased at twice the rate for men; the homicide rate for women in Juárez is reportedly more than three times as great as that in Tijuana, a border city of comparable size. The disappearances and murders have continued unchecked.
And the women’s deaths are brutal.
Many young women are found days or months after their disappearances, their bodies abandoned in vacant lots and bearing signs of torture, sexual assault, and, in some cases, mutilation. Mexican authorities’ investigations of these crimes have been said to be negligent and ineffective. And now, a human rights court has declared Mexico’s inaction to be a violation of Mexico’s international obligations to protect women and girls.
Last December 10, on World Human Rights Day, the November 16 decision of the Inter-American Court of Human Rights was made public. It held Mexico responsible for failing to respond to the disappearances of three of these young women. The seven-member Court, composed of “jurists of the highest moral authority and of recognized competence in the field of human rights” from member states of the Organization of American States, found that Mexico had violated human rights laws by failing to investigate these killings diligently and failing to punish officials who mishandled the murder investigations. The Court ordered the Mexican government to pay hundreds of thousands of dollars in damages to the families of the three victims. The case, Campo Algodonero, is named for the abandoned cotton fields in which the young women's three bodies were found.
In addition to damage awards, the Court provided an array of holistic remedies:
► a memorial in the field which gave the case its name,
► public recognition by Mexico of its fault in a ceremony and in print,
► a website listing all of the women who have disappeared since 1993,
► payment of money to the families, and
► a requirement that Mexico properly and fully investigate the murders and disappearances.
(Para. 602, subdivisions 1-26.) The Court will monitor Mexico’s progress on these remedies in a year. (Para. 602, subd. 26.)
Professor Caroline Bettinger-López' IntLawGrrls guest post summarized the decision. And Professor Regina Austin provided a take on the burgeoning filmography on the crimes.
The Court’s decision is a landmark.
It interprets not only the American Convention on Human Rights but also, for the first time, asserts its jurisdiction to consider violations of Article 7 of the Inter-American Convention on the Prevention, Punishment, and Eradication of Violence Against Women (“Convention Belém do Pará”). (Paras. 37, 75-77.) The Court found Mexico violated provisions of both Conventions through its indifferent investigation and prosecution of the crimes.
The Court also found -- based in part on Mexico’s admissions in response to reports filed to comply with its obligations as a member state of the Convention on the Elimination of All Forms of Discrimination Against Women -- that the indifference to the violence against women here was part of a larger pattern of discrimination. The Court observed:

[T]he subordination of women can be associated with practices based on persistent socially-dominant gender stereotypes, a situation that is exacerbated when the stereotypes are reflected, implicitly or explicitly, in policies and practices and, particularly, in the reasoning and language of the judicial police authorities, as in this case. The creation and use of stereotypes becomes one of the causes and consequences of gender-based violence against women.

(Para. 401.)
The Court further concluded that

when investigating this violence, some authorities mentioned that the victims were ‘flighty’ or that ‘they had run away with their boyfriends . . . this indifference reproduces the violence that it claims to be trying to counter . . . [and] it alone constitutes discrimination regarding access to justice. The impunity of the crimes committed sends the message that violence against women is tolerated; this leads to their perpetuation, together with social acceptance of the phenomenon, the feeling women have that they are not safe, and their persistent mistrust in the system of the administration of justice.

(Para. 400.)
Given this context of structural discrimination, the Court ordered permanent education and training of public officials on human rights and gender with a gender-based perspective as well as educational programs for the general population. (Para. 602, subds. 22, 23.) The Court explained that

training with a gender perspective involves not only learning about laws and regulations, but also developing the capacity to recognize the discrimination that women suffer in their daily life. In particular, the training should enable officials to recognize the effect on women of stereotyped ideas and opinions in relation to the meaning and scope of human rights.

(Para. 540.)
In short, as Judge Diego García Sayán (below left) of Peru, Vice President of the Court, observed in a concurring opinion in the case:

Violence against women is a tragedy with different dimensions and symptoms. Without doubt, it is one of [the] most extended and persistent expressions of discrimination throughout the world, and it is reflected in conduct ranging from subtle and veiled manifestations to inhuman and abusive situations” like those experienced by the women in Juárez.

(García Sayán Conc. Opn., Para. 1.)
Aside from the implications of the decision for international law, however, the decision also provides a helpful barometer of domestic attitudes toward, and perceptions of, international human rights law.
In the United States, the decision frequently prompted three questions from American lawyers and journalists:
► Will the Court’s decision make a difference?
Days after the Court’s decision was announced, the Editorial Board of the El Paso Times, the newspaper of the sister city acros

s the border from Juárez, opined that the decision, while of symbolic importance, was unlikely to make any real difference in the lives of the women in Juárez. At bottom, what the newspaper was openly wondering was: With dubious or untested enforcement powers, can an international court accomplish what Mexico could not – or would not – do alone? From the perspective of American law, this was an obvious question: in the United States, what good is a judgment if you cannot enforce it?
In the international realm, however, which relies on a pastiche of jurisprudence, diplomacy, and moral force, that is not quite the right question to ask.
International condemnation can be a powerful force in effecting change, provided a sense of social pressure and urgency is maintained. The Inter-American Commission (which, like the Inter-American Court, is charged with interpreting the American Convention) previously concluded that Brazil had violated human rights treaties by delaying for more than 15 years the prosecution of Maria da Penha’s abusive husband for her attempted murder. In response to the decision, and after advocates continued to lobby for change, Brazil enacted the Maria da Penha law to provide protection from and remedies for domestic violence at the national level.
► What significance are the non-monetary remedies?
American lawyers and courts focus not just on the enforceability of judgments, but on how much money the judgments allow a plaintiff to collect. Understandably, then, many lawyers asked me how much money the court had awarded. When I elaborated on the other remedies the Court had ordered, the reaction was decidedly less enthusiastic: what use is an apology, and how much could it matter? When a government has repeatedly denied either that there is a problem or that it can or should be responsible for its misconduct, a court-ordered apology is a healing act. Indeed, as the Campo Algodonero Court observed:

International case law has established repeatedly that a judgment declaring a violation of rights constitutes, per se, a form of reparation.

(Para. 582.) The society will have an opportunity to heal further when Mexican newspapers and the country’s government records publish the designated portions of the Court’s decision, when a memorial is placed in the cotton field site, and when Mexico acknowledges responsibility for its apathy and mishandling of the investigations of the girls’ killers at a public ceremony. And, when effective legislation and police procedures are in place, broader-based societal change will be possible. The remedies provided by the Court will then become tangible.
Indeed, Juárez' mayor has already responded to the portion of the Court’s decision requiring the placement of a monument in honor of all women and girls whose deaths went unredressed in the region. On January 30, the Las Cruces Sun-News reported that Juárez Mayor Jose Reyes Ferriz has called for artists nationwide to submit proposals for the memorial’s design on land donated by the city. According to the Sun-News, the victims’ families will be asked to review and approve the final design, which the mayor said

'must be something that represents what we feel about the deaths and that acknowledges our past errors, which were real and caused us pain. It must also demonstrate our commitment to never let this happen again in Juárez.'