There was much worth pondering in the keynote speech that Harold Hongju Koh (center left), since last June the Legal Adviser to the U.S. Department of State, delivered yesterday at the annual meeting of the American Society of International Law.
'Grrls will be posting on various aspects of that talk and others in short order. But we can't let a day go by without posting his remarks on unmanned aerial vehicles, better known as UAVs or drones (pictured below).
A few hours before Koh's speech, IntLawGrrls guest/alumna Mary Ellen O'Connell, newly elected an ASIL Vice President, had chaired a well-attended panel on the issue. Mary Ellen, who'd written a Balkinization post in support of Koh's nomination about this time last year, last December contributed an IntLawGrrls post outlining her legal concerns about the United States' use of drones in the AfPak conflict to target for killing persons believed to be al Qaeda operatives.
Thanks to ASIL's Sheila R. Ward, we set forth verbatim relevant quotes from Koh's speech, which you can watch in the video clip here.
Koh, formerly the Yale Law Dean and an ASIL Counsellor, maintained that such use is legal, essentially embracing the "war" paradigm that many others have challenged. He stated:

[I]t is the considered view of this administration … that targeting practices, including lethal operations conducted with the use of unmanned 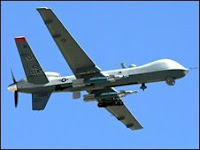 aerial vehicles (UAVs), comply with all applicable law, including the laws of war…
As recent events have shown, Al Qaeda has not abandoned its intent to attack the United States, and indeed continues to attack us. Thus, in this ongoing armed conflict, the United States has the authority under international law, and the responsibility to its citizens, to use force, including lethal force, to defend itself, including by targeting persons such as high-level al Qaeda leaders who are planning attacks….

He then detailed how "this administration has carefully reviewed the rules governing targeting operations to ensure that these operations are conducted consistently with law of war principles"; specifically:

► First, the principle of distinction, which requires that attacks be limited to military objectives and that civilians or civilian objects shall not be the object of the attack; and
► Second, the principle of proportionality, which prohibits attacks that may be expected to cause incidental loss of civilian life, injury to civilians, damage to civilian objects, or a combination thereof, that would be excessive in relation to the concrete and direct military advantage anticipated.

Koh endeavored to assure his audience that in

U.S. operations against al Qaeda and its associated forces – including lethal operations conducted with the use of unmanned aerial vehicles – great care is taken to adhere to these principles in both planning and execution, to ensure that only legitimate objectives are targeted and that collateral damage is kept to a minimum.

[S]ome have suggested that the very use of targeting a particular leader of an enemy force in an armed conflict must violate the laws of war. But individuals who are part of such an armed group are belligerent and, therefore, lawful targets under international law....
[S]ome have challenged the very use of advanced weapons systems, such as unmanned aerial vehicles, for lethal operations. But the rules that govern targeting do not turn on the type of weapon system involved, and there is no prohibition under the laws of war on the use of technologically advanced weapons systems in armed conflict – such as pilotless aircraft or so-called smart bombs – so long as they are employed in conformity with applicable laws of war….
[S]ome have argued that the use of lethal force against specific individuals fails to provide adequate process and thus constitutes unlawful extrajudicial killing. But a state that is engaged in armed conflict or in legitimate self-defense is not required to provide targets with legal process before the state may use lethal force.

[On this boldfaced statement, consider the rather different view in my post above, which reprints a passage, from my 2006 article, that recounts Justice John Paul Stevens' concerns regarding a targeted killing in which he and other Navy codebreakers played a role -- the killing in 1943 of Admiral Isoroku Yamamoto, architect of Japan's attack on Pearl Harbor.]
Koh maintained that due precautions are taken even without the interposition of due process:

Our procedures and practices for identifying lawful targets are extremely robust, and advanced technologies have helped to make our targeting even more precise. In my experience, the principles of distinction and proportionality that the United States applies are not just recited at meeting. They are implemented rigorously throughout the planning and execution of lethal operations to ensure that such operations are conducted in accordance with all applicable law….

[S]ome have argued that our targeting practices violate domestic law, in particular, the long-standing domestic ban on assassinations. But under domestic law, the use of lawful weapons systems – consistent with the applicable laws of wear – for precision targeting of specific high-level belligerent leaders when acting in self-defense or during an armed conflict is not unlawful, and hence does not constitute ‘assassination.’