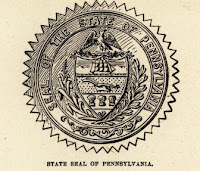 On this day in ...
... 1780 (230 years ago today), amid the American Revolution, the legislature of the one-time British colony of Pennsyvania became the 1st in history to move to abolish slavery. Pennsylvania's Act for the Gradual Abolition of Slavery banned importation of slaves, guaranteed the children of slaves born in Pennsylvania would be born free, and provided that domestic slaves of citizens from other states would have the right to manumission after the household resided 6 months in Pennsylvania; however, U.S. Congress members were exempted from the last provision.

"2002 was the 225th anniversary of the abolition of slavery in the State of Vermont.

It was an independent republic after the American Revolution: the Commonwealth of Vermont. On 8 July 1777 it adopted a constitution which prohibited slavery.

It was admitted to the Union in 1791. It thus has the honor of being both the first sovereign state (as it was at the time) in modern times and the first State of the Union to abolish slavery."