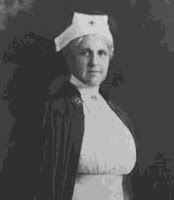 On this day in ...
... 1862, Jane Delano (left) was born in Schuyler County, New York, and soon after lost her father, a casualty of the Civil War. Following a short stint at teaching, she enrolled in the Bellevue Training School for Nurses, graduating in 1886. Her reason?

I think the nurse's profession is a fine one, and I like it.

Delano not only practiced but also taught nursing. She served as superintendent of the Army Nurse Corps from 1909 to 1912, and then founded the American Red Cross Nursing Service, which tended to those injured in World War I. During an inspection of conditions in postwar France, she contracted an ear infection and died in 1919 at a base hospital. She's buried in Washington's Arlington Cemetery.